On view through Saturday, April 12th

devening projects + editions is pleased to invite you to Different Every Day, Gerd Borkelmann’s second solo of show with the gallery. In the off space, Mike Rea debuts with Exile on Main Street, an ambitious new sculpture installation. Finally, responsibility, is Seth Hunter’s fifth Ecotone project in the spaces between our two galleries.

Join us at an opening reception for the artists on Sunday, March 9th from 4 – 7pm. The exhibition continues until April 12th.

In Different Every Day, German artist Gerd Borkelmann brings a selection of beautifully articulated works on paper to his second exhibition at devening projects + editions. Initiated more than eight years ago, this ongoing project continues to result in evidence of this master formalist’s ability to stretch and reinvent his visual language. In Different Every Day, and for the first time, Borkelmann shows two large works on paper made specifically for the exhibition. These new pieces can be understood as a logical consequence of the previous work and closely related to the conceptual parameters and structural characteristic of the smaller drawings. Developed over many sessions, the drawings undergo a deliberate process of editing, modification and resolution — literally, different every day. The fundamental mobility and openness in Borkelmann’s work does not distinguish strictly between gestural and compositional ideas. Rather, the works suggest a kind of ambivalent state providing a range of interacting constellations where atmospheric color fields, lines and latticed structures shape unfinished tectonical, structural and pictorial space. Borkelmann’s works are abstract; they’re always on the hunt to arrive somewhere between escalating chaos and a reflexive regulatory system. In many ways, his work is driven by the medium-specific aspects of painting and its process; in other ways the work evokes various associative possibilities of form and a subliminally restrained expressivity.

Gerd Borkelmann has been showing his drawings and paintings since the early eighties in Europe and the United States. He has had solo shows at Galerie Dorit Jacob in Cologne, at the Kunstverein Peschkenhaus in Moers and the Museum B.C. Koekkoek in Kleve, Germany at the Galerie im Trudelhaus in Baden, Switzerland. His work can be found in collections of the Deutsche Bank, the Leopold Hoesch Museum in Duren and the Museum Kurhaus in Kleve. Gerd Borkelmann lives and works in Kleve, Germany.

For over a decade, Chicago artist Mike Rea has used his bombastic wooden sculptures to conflate notions of working hard and playing hard. Regenerated moments of cinematic horror, science fiction, comedy and drama intermingle with memory to form bizarre personal narratives. Whether the work operates as conventional sculpture or as props within interactive installations and performances, these typically large-scale works sensitively reflect a culture of humor, violence and vulgarity.

Although he continues to mine pop culture and its stereotypes, in Exile on Main Street, Mike Rea is discovering some edgy new themes. Pulling from the margins of literature and films, he’s taking set pieces that one might barely notice moves them front and center. Chain link fences, bathroom stalls and graffiti are meticulously reproduced in wood to become poetic moments of the desired and the strange. Replicated boom mics place the audience on the set, casting them as complicit participants in his production. These objects and sets are familiar; they’re almost clichéd in certain filmic and literary genres. Ultimately, it’s the way Rea uses material from the constructed reality of fiction and places it directly in our own. The result is both funny and unnerving.

Mike Rea has exhibited in Chicago at EbersMoore Gallery, ThreeWalls, Heaven Gallery and Western Exhibitions and the Elmhurst Art Museum in Elmhurst. In California, he’s shown at Guerrero Gallery in San Francisco and the Scion Gallery in Culver City. Rea recently participated in the international exhibition/residency Forest Art in Darmstadt, Germany; was featured in the Power of Making at the Victoria and Albert Museum in London; and showed at the Kunstmuseum Thurgau, Switzerland. In fall 2014, Rea will have a solo exhibition at the Devos Art Museum, Marquette, Michigan. Mike Rea lives and works in Chicago teaches sculpture at Northern Illinois University.

We’re very excited to work with Seth Hunter on Ecotone, a new program at devening projects + editions presenting artist interventions triggered by the interstitial spaces between our main gallery and the off space. The fifth in a year-long series of projects, Chicago artist Seth Hunter will present responsibility at the March 9th opening. As an artist-in-residence in the gallery between July 2013 and July 2014, Hunter is working with, in and around the space to reveal links between his own conceptual interests and the physical space. responsibility is comprised of three works and an edition focused on revealing how responsibility relates to personal and artistic integrity. Hunter is interested the instructive parts of daily life and navigating the world with a sense of wonder at what can be learned from a serious commitment to responsibility. Coinciding with each main-gallery exhibition during the fall and spring seasons, he will produce and present seven different editions. 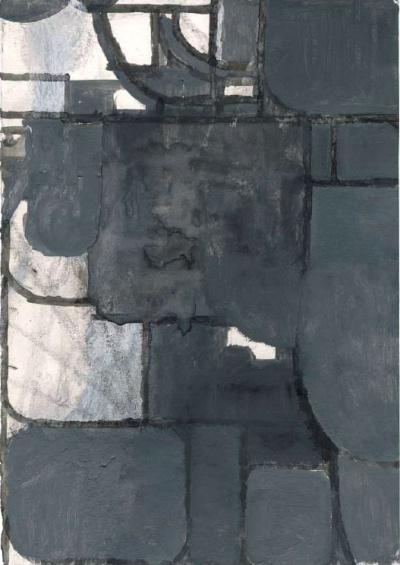