On view through Saturday, March 1st

The Northwest Passage—an historic golden fleece of shipping routes—opened up in the Arctic, and scientists continue to predict dramatic rising seas. Bee populations have fallen rapidly, raising questions about food production. Mice grow human ears on their backs in laboratories and rabbits glow in the dark. In this new age of ecological awareness, “Nature” as a Romantic ideal—a pristine mountainside beyond the scope of human influence—is but a dithering spirit. Rather than succumb to the pang of its loss, “Ghost Nature” exposes the limits of human perspective in the emergent landscape that remains: a slippery, network of sometimes monstrous creatures, plants, and technological advancements. 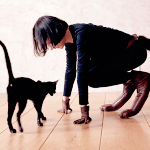