On view through Sunday, January 19th

The diabolical and the angelic enter into a dialectical embrace in Doug Ischar’s Boy, Pig, Power. Images of comely blond boys – shot at the Russian River in 1986 – are intermixed with video-based sculptural works employing queer ephemera and a young Jeffrey Dahmer. Jeffrey, then 14, looks sweet and harmless. Text from a mid-century homophobic novel contests a handwritten note given to Ischar by a young Atlanta admirer (circa 1990). The medium of photography is both celebrated and interrogated via massive shifts of scale and modes of presentation in Boy, Pig, Power. The past looms large in this installation by a veteran gay artist just turned 65, and the delight of evanescent memory and its simultaneous crushing weight are felt throughout.

Boy, Pig, Power is Ischar’s first new installation in ten years, his recent work having been devoted to experimental video. Three of Ischar’s videos are to be included in the upcoming Whitney Biennial of American Art. 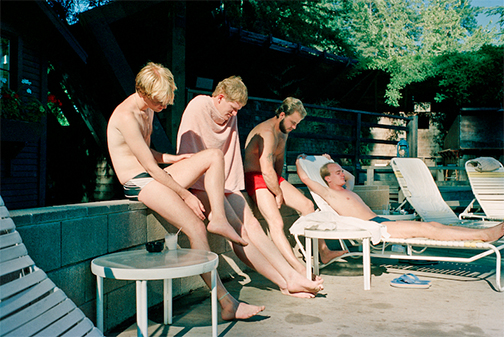