Mark your calendars for Heaven Gallery’s 13 year anniversary, art auction and raffle, add to your art collection from some of the best emerging artists while supporting Heaven Gallery.

Over the past 13 years Heaven has had many incarnations. There was the prepubescent party years with Ed Mar’s “Buddy,” described by many as the best years of their lives, there was the video and film era with Doug Lussenhop and Eric Fensler’s GI Joe video’s that went viral before the age of youtube, there was the pre-fence years with movie screened on the back porch, the Elisa Harkin years and the Harold Arts/Joe Jeffers years that helped to define the Heaven style.
The gallery’s protest improv jazz series started by Jason Ajemian from Highlife still going, now 7 years strong. Once in the Heaven/Harold booth at NEXT art fair David Moire performed by playing a squeaky drawer from the gallery’s flat file. Heaven has hosted raw performances by Anni Rossi who played the fiddle and stomped her feet and Angel Olsen performed bringing a crowded room to silence, there was even free piano lessons for kids.

Heaven Gallery’s 13 year anniversary party will include a silent art auction and art raffle in the main gallery featuring works by over 30 artists.
The Best of Heaven art show; an annual curated show,will be in the front gallery. The evening will include a special unveiling of our new mural by Joe Jeffers, seen from the blueline.

Best of Heaven features work by:

art auction and raffle include work by: 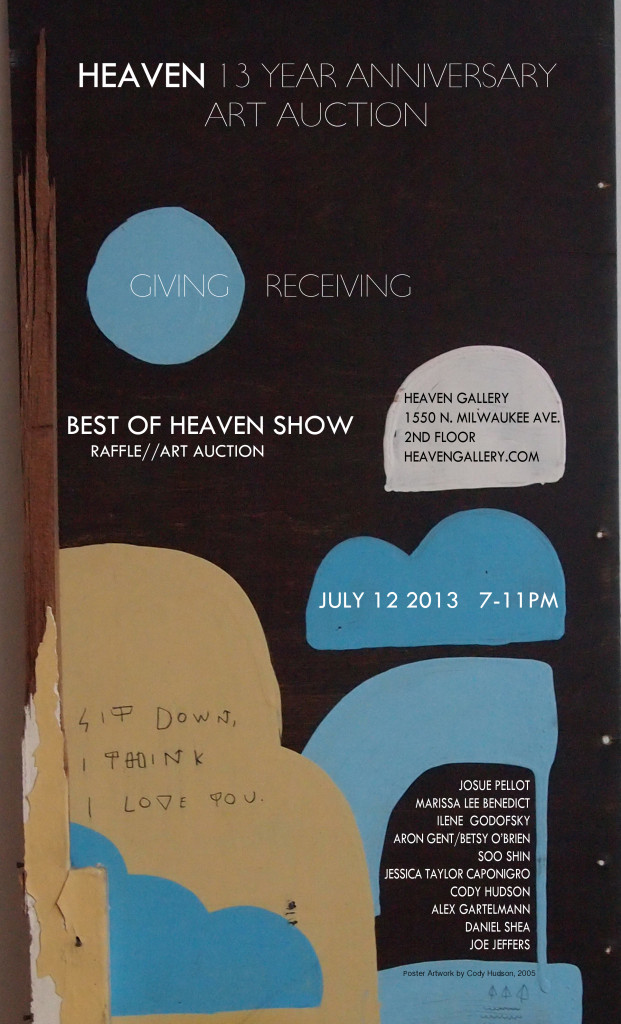