On view through Friday, July 12th

Five Chicago artists have organized a group show at which they plan to give art away “just to see what happens.” The name of the show is ‘Emergence,’ and one of the artists is falsely claiming that he grew up an orphan. The others plan to confront him on this at their show on Sunday, July 12th at the Chicago Art Department (1932 S. Halsted St. #100).

“If he was raised as an orphan, I came up as the Prince of Wales,” snarled Nathan Peck, a tenured instructor at St. Xavier Uni- versity. “Yeah. He’s an orphan and I’m an cosmonaut. If you believe that, I’ve got some art to sell you.”
The highlight of the evening will be when everybody gets measured. The person who comes closest to the median height will be awarded a free piece of original art (chosen by the artist). Participants will measure themselves to the nearest 64th of an inch on the provided measuring tape.

The show is organized by Mako James, a Chicago boutique art agency which specializes in curating whole communities
of artists who represent the ‘Chicago sub-culture’ of the moment. In this case, the art ranges from laser cutting to collages featuring General Ulysses Grant and a windmill. ‘Emergence’ will be the inaugural exhibition for the small start-up, continuing with quarterly showings throughout the city continuing in September.

Christopher Breedlove— His laser cuttings are on walls from Chicago to Taipei. He also created ‘The Human Avatar Project’ in which he projects other peoples’ faces onto his own transfixing kids at music festivals.

Zac Franzoni— His penchant for live painting has him at events refusing to explain himself.

Michael Egon Schiele— He went to art school, purportedly. No one knows much about this shadowy figure, but his association with not-to-be-named-here occult groups, laissez faire political collages, and a penchant for cooking bacon.

Talley Phillippe-McLain— Since there has never been an orphan with a hyphenated name, we can rule her out. Although never trust a woman with a voodoo doll.

Nathan Peck— Curator and an Associate Professor at St. Xavier University. Nathan is also a founder of the Chicago Art Department, and is possessed of a morbid fascination with Abraham Lincoln. Ask him anything about Lincoln, and he’s likely to know the answer. When he goes to restaurants, he refuses to ask for a booth. 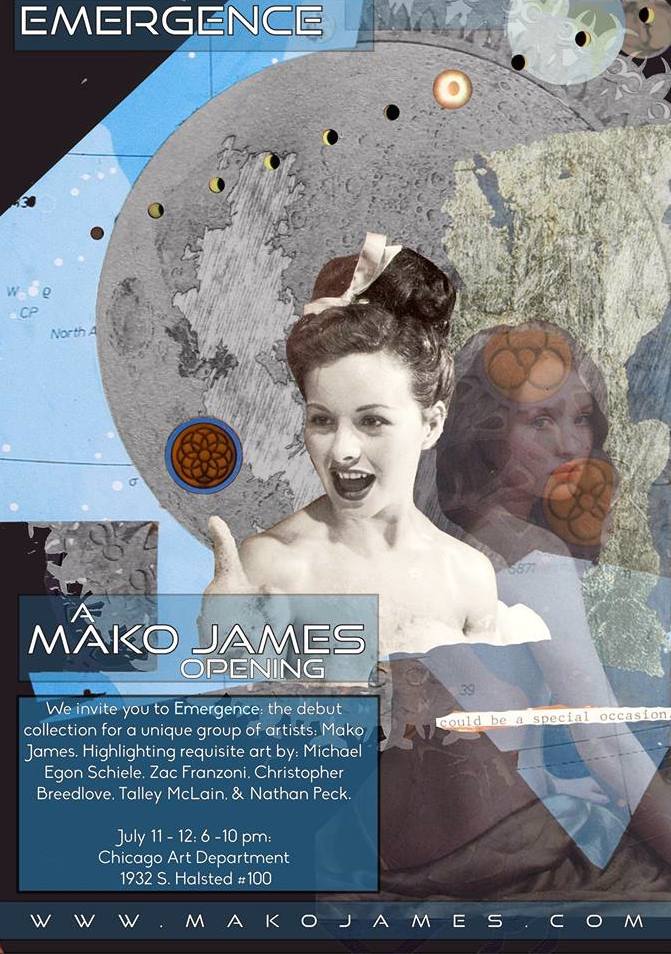