On view through Friday, June 21st

mACRES & brACREs is a one night show of performances from the Chicago New Media artists. Each of these artists probe the depths of various forms of technology, bending breaking and reconfiguring its mechanisms, signals, and data. These artists generate serendipitous connections, surprising images, and transformative sounds as the existing technology’s structure is teased apart layer by layer producing new signals which are presented in a live video feed. In each performance the structure of the signal is twisted and interrogated, held steady by the artists and hovering just before complete breakdown.

SQUARESQUARE is a realtime video++audio performative collaboration that uses hacked/modified/bent electronics as well as commercially available hardware+software. Our video primarily comes from hacked video game consoles (PS1, PS2, NES, Genesis, etc). We use additional video equipment, some of which are similarly augmented as well, to further abstract and compile imagery. SQUARESQUARE (Saul Rojas, Alex Halbert, Sam Mewton, + Dave Musgrave) utilizes both the content and the hardware of game play to form a marriage of sound and image in order to guide the audience through an ambient space that exists within these worlds. The group was formed 3 years ago @ The School of the Art Institute of Chicago.

Satrom performs realtime audio/video noise with I ♥ PRESETS, builds artware with PoxParty and co-instigated the GLI.TC/Hconference/festival/gathering. His time-based works have been enjoyed on screens of all sizes, he has performed in many localizations, and his artwork and efforts have been featured in glowing-rectangles and on dead-trees.

Jon Satrom is looking forward to being a visiting artist during session 3 this summer at ACRE.

James Connolly [of Cracked Ray Tube] Cracked Ray Tube is a collaborative hardware hacking project by artists Kyle Evans and James Connolly. The project creates a synchronized audio/video environment self-generated by the feeding back of communication networks of two obsolete technologies⎯analog televisions with their video transmitters and CRT computer monitors and their VGA video signals. The red, green, and blue video signals of the VGA cable are processed and fed back through a sound mixer simultaneously generating the audio and video information that is received, deciphered and displayed by multiple computer monitors. Influenced by experimental media artists such as Nam June Paik, the project exploits the materiality of analog audio and video signals pronouncing the technology’s intrinsically hidden yet vastly complex spectrum of sound, image and color. 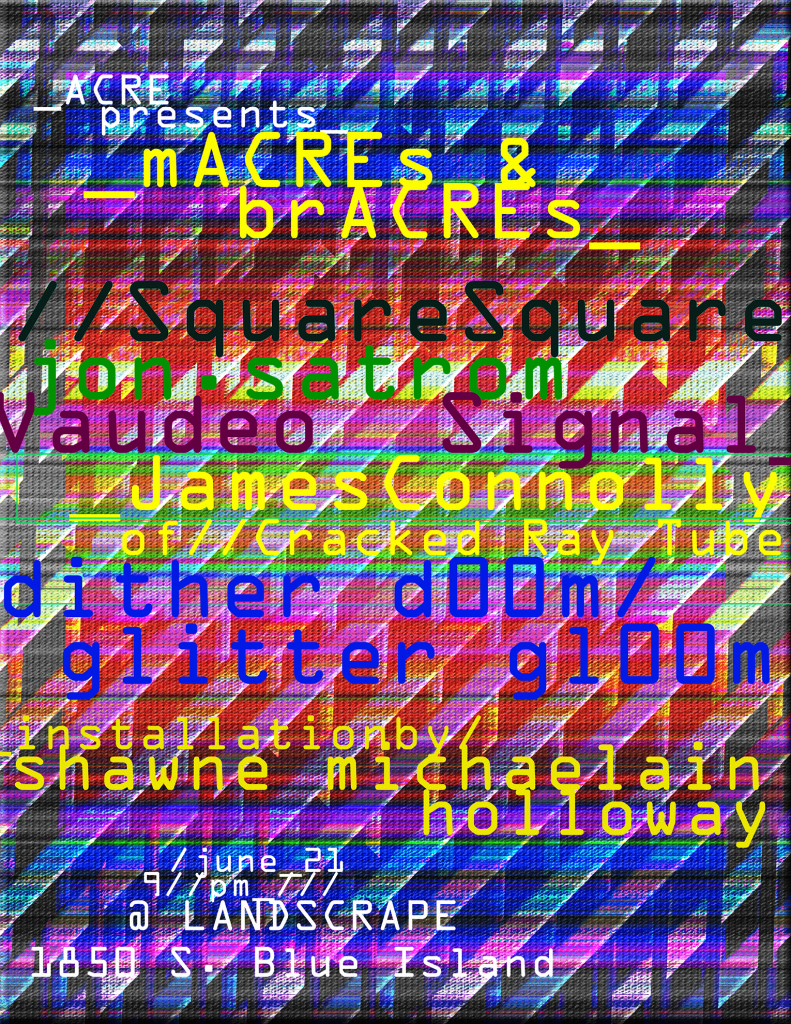