Theories about language. We learn them in school. Diagram sentences. Learn complicated names of complicated parts of speech. Each part performs its task. Sometimes there are parts that aren’t team players. We use words differently in sonnets and songs; don’t always follow rules of making sentences. Differently still in liturgy, in prayer.

Judith Brotman is offering a word–not quite advice, not exactly a contract. You can take it in like the eucharist, like a becoming through receiving, like kabbalah. Taking Judith’s word engages you as an entry into a lexicon. The record. Named in the body of a text. Not the name of any god. Not belief. Not understanding. It may just pass. While within the body it may become integrated as part of the body, its own kind of transubstantiation. A kind of begetting, a passage into law. Getting on with it. Getting it on. Cycles of life.

The saddest part of a broken heart isn’t the ending so much as a start. (Lyric by Feist)

As with any vision, the seeing of this word is not enough. It has to be nurtured, given time. If no, it remains a flash of nothing that reveals; well, it doesn’t reveal. But if it is honored, recited, it becomes familiar, then intimate. Intimacy leads to the begetting part, and we don’t have to understand what happens to get to the begetting. Even with a word.

A lamp illuminates itself, but not from the bulb. Michael’s lamp is its own muse. Lighting from within, or the surface projecting an illuminated swagger. Furniture designed to organize our homes, our stuff, stand in for presence. We are how we are organized. We are the piles of stuff (DNA) arranged to present our priorities, histories and conceptions. The structure may or may not be built to last, but the stacking, the stuff presented, shows a fragile temporal condition that passes onto the next. Not life after death, but the thousands of shifts, of re-becomings, that are life. What and where we are, if only for a moment.

Painting and picture planes, ground and grounded. Light and illumination. Language and enlightenment. We artists are consumed with these themes. Judith and Michael are digging in occupied terrain. These are among the big themes not of our generation but of generations. Whenever we pit ourselves against such grandeur, there is another question—did anything happen at all? Perhaps the shift in vision will open up much to you. Perhaps all you will see is a glimmer that other people speak about with reverence but remains entirely hidden right there in front of us all. 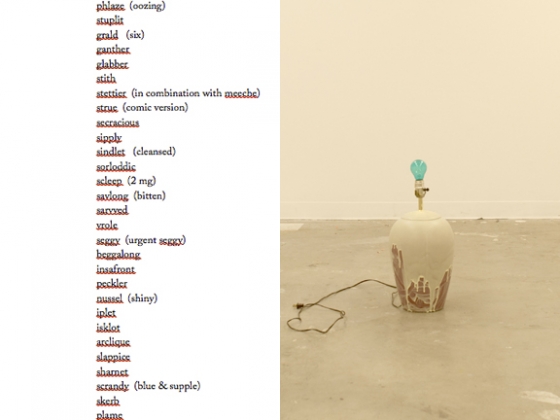