On view through Thursday, July 25th

After several exhibitions concentrated on sculpture and installation, Cody Hudson returns to painting with a new series of medium to large works on panel. His previous series employed an idiosyncratic yet simple recurring balloon shape in vertiginous, often radial, patterns. The results were abstractions that remained grounded in Hudson’s own narrative language and background in graphic design. At times very clean and others purposely messy, they steadfastly stuck to an elemental relationship with color, shape, and line.

Hudson’s new paintings are decidedly looser. They are also pushed forward in their painterliness (larger gestures employed predominantly by brush) as well as a change in scale (the cornerstone works in the exhibition are the largest contained paintings the artist has made to date). The graphite-based line work that gave the earlier paintings much of their skeletal structure is still noticeable in places, but it is buried further into the painting’s surface. Ultimately, too, the works are more complexly layered with thicker, built-up surfaces, elements cut out and wood shapes added back in, often referencing his recent sculptures and site-specific installations. The artist also makes significant use of Krink, an indelible ink used in graffiti applications, as well as black mica dust.

CODY HUDSON (American, b. 1971) lives and works in Chicago. Solo exhibitions include Let’s Do Some Living After We Die, Hyde Park Art Center, Chicago; I May Be Right and I May Be Wrong, but You’re Gonna Miss Me When I’m Gone: Notes On Building A Time Machine (with Sean Cassidy) at New Image Art, LA and This Ain’t No Bottomless Pit Here at the Museum of Contemporary Art, Chicago. Group exhibitions include White Noise Drawn Together at V1 Gallery in Copenhagen, 2008, and Throb Throb: Rock and Roll Currents in Chicago Today, curated by Dominic Molon, Chicago, 2007. Several new paintings were included in Let Your Light In, Country Club, Los Angeles, in August 2011. He was part of the recent exhibition In the Good Name of the Company, comprised of works made at the iconic LA Colby Poster Printing Company, curated by Jan Tumlir, with Christopher Michlig and Brian Roettinger, at ForYourArt, Los Angeles. His sculptures are currently on view in the solo exhibition Flip Your Wig, at the Elmhurst Art Museum. His work has been exhibited at fairs in New York, Basel, Los Angeles, and Miami. 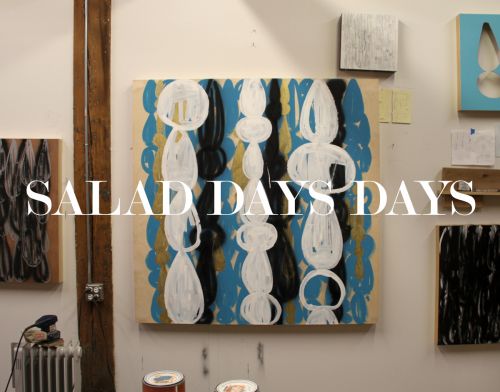