Alex Chitty: The Way They Wanted to Sleep

On view through Thursday, July 25th

Fundamentally based in the belief that all objects and ideas hold an innate and often indefinite potential, Alex Chitty creates work that engages and illuminates how things influence each other. Making use of the history of scientific collecting, classifying, documenting, and categorizing, Chitty pulls found objects and images from their original context to create consequential shifts in meaning. Through manipulation, prescribed facts and data are forced to become more than previous incarnations. By hinting towards the habits of the human mind and eye, and the cultural history embedded within, Chitty creates a network of collective references from which she works. The exhibition’s title itself is a reinterpretation of the subject line of an email the artist received from her mother. Now removed from its initial implication, it alludes to something never originally intended, perhaps becoming more significant in the process.

The works in The Way They Wanted to Sleep borrow from window presentations and museum display cases, relying on shell like containers as partially empty areas of holding. The seemingly transitional state of the pieces makes mobility, or the potential for movement, apparent and expected. These missing or removed areas create a lack so apparent that it encourages the viewer to fill the voids on their own. The images in the photograph operate as a surrogate for these moments or objects that are missing from the sculptures themselves. The sculptures then, in conversation with the photograph, speak to the amalgamation of both creating and exhibiting works of art.

ALEX CHITTY (American, b. 1979) lives and works in Chicago, IL. Chitty received her B.A. from Smith College in 2001 and her M.F.A. from the School of the Art Institute of Chicago in 2008. Recent exhibitions include Recent Work at Corbett vs. Dempsey in Chicago; Platonic Year at Alderman Exhibitions in Chicago; Big Youth II at Bourouri Gallery in Berlin, Germany; Book Art at Kyung-In Museum of Fine Art in Seoul, Korea. 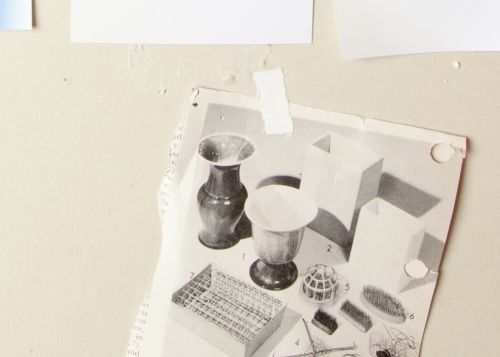