On view through Sunday, August 11th

Participating artists: Jeff Donaldson, Jae Jarrell, Wadsworth Jarrell, Napoleon Jones-Henderson, Barbara Jones-Hogu, Carolyn Lawrence, Nelson Stevens, Gerald Williams.
AFRICOBRA: Philosophy, the second of three exhibitions comprising AFRICOBRA in Chicago, will be on view at the Logan Center Gallery at the Reva and David Logan Center for the Arts, June 28–August 11. An opening reception for AFRICOBRA: Philosophy will be held 6-9 pm, June 28, at the Logan Center Gallery. Related programs, including gallery talks and a weekly film series, have been organized in conjunction with AFRICOBRA: Philosophy and are listed below.
AFRICOBRA in Chicago is a linked series of exhibitions and public programs scheduled May–September 2013 focusing on the Chicago artists’ group AfriCOBRA (African Commune Of Bad Relevant Artists), founded on the South Side of Chicago in 1968 and still active. AFRICOBRA in Chicago is co-presented by three South Side institutions: The South Side Community Art Center, the Reva and David Logan Center for the Arts at the University of Chicago, and The DuSable Museum of African American History. A jointly published website, AFRICOBRAchicago.org, links these exhibitions, programs, and research. The site will be updated with artworks, artists’ bios, and multimedia as AFRICOBRA in Chicago progresses.
AFRICOBRA: Philosophy, the exhibition at the Logan Center, is designed to highlight the aesthetic philosophy of AfriCOBRA first articulated in statements and exhibition texts in the late 1960s and early 1970s. Curated by Rebecca Zorach, Professor of Art History at The University of Chicago, the exhibition in the Logan Center Gallery focuses on the AfriCOBRA approach to image making collaboratively developed by the five founding members (Jeff Donaldson, Jae Jarrell, Wadsworth Jarrell, Barbara Jones-Hogu, Gerald Williams). The broad selection of prints, paintings, and textile works demonstrate how AfriCOBRA’s philosophy advanced key themes of revolution and family and how it drove the creation of inexpensive printed artworks “for the people” by founding artists and other early members of the group (Napoleon Jones-Henderson, Carolyn Lawrence and Nelson Stevens). Selected recent works also pose the question of how founding principles continue to inform the artists’ work.
AFRICOBRA in Chicago began at the South Side Community Art Center with AFRICOBRA: Prologue – The 1960s and The Black Arts Movement and continues at the DuSable Museum with AFRICOBRA: Art and Impact. Both exhibitions overlap with the Logan Center exhibition. Attendees are encouraged to pick up an AFRICOBRA in Chicago Passport, available at each location, and collect passport stamps at each exhibition and event they attend. Progressive prizes will be awarded according to the number of stamps collected. Find event details below.
Major support for AFRICOBRA in Chicago has been provided by the Terra Foundation for American Art, an organization dedicated to fostering exploration, understanding, and enjoyment of the visual arts of the United States for national and international audiences. To further cross-cultural dialogue on American art, the Terra Foundation supports and collaborates on innovative exhibitions, research, and educational programs. Additional support for the South Side Community Art Center portion of the project has been provided by the Chicago Community Trust. Additional support has also been provided by the University of Chicago Arts Council.

AFRICOBRA IN CHICAGO EXHIBITION DATES
*Visit AFRICOBRAchicago.org for a detailed list of events.
AFRICOBRA: Prologue – The 1960s and The Black Arts Movement
May 10–July 7, 2013 at The South Side Community Art Center

AFRICOBRA: Philosophy
June 28–August 11, 2013 at the Reva and David Logan Center for the Arts 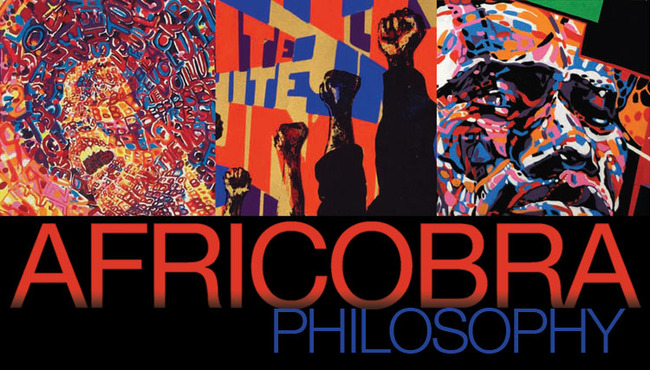