Richard Fishman is a Professor of Art at Brown as well as the Director of the Brown University Creative Arts Council. He received his BFA from the Rhode Island School of Design and his MFA from Tulane. He has been awarded both the Howard Foundation and Guggenheim Fellowships. Richard is primarily interested in sculpture. In the past few years he has focused on a combination between old world techniques using stone and glass as well as new technologies involving computer aided imaging and 3-dimensional rapid prototyping. He has also spearheaded innovative research into creativity and the mind through his teaching, including projects such as the Creative Mind Initiative, the Granoff Center for the Creative Arts, and the course Hybrid Art. 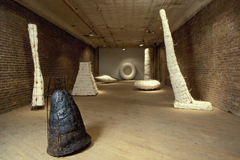