Carol Jackson and Julie Potratz share a focus on theatricality and power. In political ways, in history, in the trappings of language.

Carol has been making fragments of stage architecture. Parts of a stage that frame the scene. Proscenium, if you want to get technical. Carol is playing with the early root of the word when the action happened in front of the front—the frontispiece arch became the background. Everything is doubles. Her stage pieces frame and edit in the traditional ways that a stage frames and edits, but her objects also focus or describe gaze in a second manner too. They use illusionistic rendering rules of perspective. The lines converge. But they do it wrong. The perspective is skewed no matter which direction you are coming from.

Carol directs with an iron fist. Feeds you line delivery, makes sure that you get to the correct emotional response. Language that forms responses in your mouth—we understand the moment through these strange words, but they are not language–only sounds. And these sounds that are not words but mean things like words move. Sounds hang in the air for a fleeting moment and then vaporize and are only left as memory. Then cycle ‘round to do it all over again. Emotions on conveyor belts, ready at the check out counter.

Julie’s world’s also a stage. World stage. World power. Power suits and painting. Clothes make the man, but in this case she is tough as nails. Whether I say it out loud or not those nails make me think of iron. The tough doubles.
Julie paints a scene. Uses her illusion 2. Her body is her canvas, and it works in that art way and in that theater way. Though Julie’s gaze falls on the most powerful women in the world, she empties the drama of overt politics. Sure, we recognize her characters, but we focus on their vulnerable fashion choices and not the most recent policy decision. Doubling, and double D’s. Decisions of war can be eclipsed by plunging necklines and a rack. When the power suit is exchanged for a flouncy floral and florid formal, that dress becomes as important as a war. At least if we count the headlines.

Carol is a stalwart of Chicago’s art scene. She is known for her conceptually rigorous leather work and sheet music drawings. She has a substantial international resume including shows at the Smart Museum, Gallery 400, Three Walls, Roots and Culture, the Hyde Park Art Center, the Cultural Center, the Chicago Project Room all in Chicago, 10 in One both in Chicago and New York, Van Harrison in New York, L.A.C.E. in Los Angeles, Kunsthaus Speckstrasse in Hamburg, More Over Gallery in Naples, the Van Abbe Museum in the Netherlands and many others.

Julie Potratz’s work spans across the disciplines of costume design, performance art, photography, and acting. After receiving her BFA in 2008 from the Kansas City Art Institute she went on to be a member of Whoop Dee Doo, a kid-friendly faux public access television show featuring live performances by various local groups and individuals in the community. It is an art extravaganza encouraging audience participation and showcasing the talents of everyone from marching bands to tap dancing grandmas.  She has also starred in two feature length independent films written and directed by Laurel Nakadate. “Stay the Same Never Change”, a movie shot on location in Kansas City, MO premiered at the 2008 Sundance Film Festival. And “The Wolf Knife” starring Christina Kolozsvary and Julie Potratz premiered at the 2010 LA Film Festival. She has exhibited at Roots and Culture and Cabin Exhibitions in Chicago. 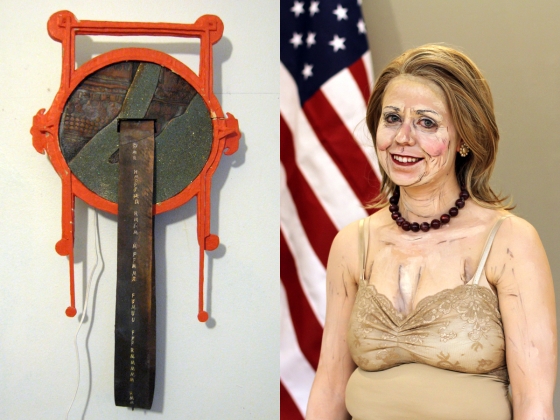