On view through Friday, May 24th

The Need to Paint

Zolla/Lieberman Gallery is proud to present The Need to Paint, an exhibition in four parts, featuring recent work by Phyllis Bramson, Nicholas Ostoff, Mario Romano, and Carly Silverman. Silverman focuses her immediate attention on the most intimate relationships – crushes, lovers, and best friends forever, while Bramson’s work is darker – she uses folly and innuendo as narrative tactics to embody exaggerated fictions about love. Ostoff and Romano’s paintings, which are more distorted and abstract, also draw on personal memories, experiences, and touches to explore the intersection between the internal and external world. Although the background and technique of each artist varies greatly, they share a common compulsion, and employ painting as a means to process, celebrate, and reflect on the intricacies of everyday life.

Love and Affection In a Troubled World
Bramson’s paintings are infused with lighthearted arbitrariness and amusing anecdotes about love and affection in an often cold and hostile world. Mostly, the work percolates forth life’s imperfections. The paintings don’t take matters of decorum all that seriously, refusing to separate manners of taste from larger questions about ‘good behavior’. Projecting reactions to all sorts of sensuous events, from the casual encounter to highly formalized exchanges of lovemaking (and everything in between), the paintings become miniaturized schemes which meander between love, desire, pleasure, tragedy and cosmic disorder. The burlesque-like images and usually theatrical incidents, allow for both empathy and ‘addled’ folly, while projecting capricious irritability with comic bumps along the way. Her visual sources remain those of Rococo and Chinoiserie of the 18th century as well as Chinese Pleasure Garden paintings and the French painters, Boucher and Fragonard.

Phyllis Bramson received a MFA in Painting from the School of the Art Institute in Chicago,Illinois. She received a Guggenheim Fellowship, Louis Comfort Tiffany Grant, Senior Fulbight Scholar, Anonymous Was A Woman 2009 Award, and the 2012 Distinguished Artist of the Year/ Chicago, from The Union League of Chicago. Over thirty one person exhibitions including: The New Museum of Contemporary Art in NY,Cultural Center of Chicago, Boulder Art Museum and Renaissance Society at the University of Chicago ( mid -career survey). Included in numerous group exhibitions such as: Seattle Art Museum, Art Institute of Chicago, Museum of Contemporary Art/ Chicago, Smart Museum, Renwick Museum and the Corcoran Museum’s 43rd Biennial.

Tracing 2
Nicholas Ostoff is interested in exploring notions of space, particularly the peripheral spaces within his quotidian surroundings. His recent work is inspired by elements within the interior domestic sphere, such as random surface marks, reflections, cast shadows and fragments of banal, commonplace objects. Through the process of painting, Ostoff strives to transform these overlooked, familiar visual phenomena in order to suggest a sense of absence and suppressed elements of the uncanny.

Nicholas Ostoff was born in Los Gatos, California, and spent his formative years in Toronto, Canada. He currently divides his time between Chicago and Toronto. Ostoff received a BFA from the Ontario College of Art and Design in 1999, and an MFA from the School of the Art Institute of Chicago in 2012, where he also won the George and Ann Segal Graduate Fellowship. He has received numerous grants and fellowships, and his work has been reviewed in such Canadian periodicals as the Globe and Mail and Canadian Art Magazine. His work was recently included in group exhibitions at Zolla/Lieberman Gallery (The Question of Their Content) and Adds Donna (duck/rabbit), along with a solo exhibition at Devening Projects (Tracing). Ostoff is represented in Toronto by Diaz Contemporary.

Those Damn I Love Yous
“My work is made in the studio. However, it is conceived from constant chaos of space and time from the outside world. It’s a chaotic struggle – one that I will never catch up with and one that I will never understand. It leaks into my process of making. All I care about is an experience, a confrontation between the inherent traits of a painting/or person/or an art piece. I work and re-work, compromise and reduce, which fails to express too many thoughts. When it is clear, it’s a mess. When it is a mess, it’s clear. I think about beauty. But I confuse myself with what it means. I think that when I feel something, or have an experience, whether it be beautiful or sad or scared or a letdown or confused…a feeling…it’s a mess. It’s a surface and an image smash. I am not interested in the right amount of touch or marks, or a poetic gesture. I am searching for a collision of information as a way to talk about society…the today, where are we? ” – Mario Romano

Mario Romano was born in 1983 in upstate New York. He received his Bachelors of Fine Art at the State University of New York at Oswego in 2005. He also worked as a staff artist in residence at the Vermont Studio center for a year prior to coming to Chicago where he received his Masters in Fine Art at The School of the Art Institute of Chicago. Mario has showed extensively in this past year. His most recent shows include: Fiebach & Minninger, in Cologne, Germany. Monya Rowe Gallery. NY, NY and Julius Caesar, in Chicago. In May, he will be having a solo show at Autumn Space.

New Paintings
Silverman’s new paintings capture everyday moments of human interaction with an emphasis on simple, loose, painterly mark making and a color palate of both pastel and vibrant colors. Alluding to hazy summer memories, her paintings often have a dream like feeling to them. Lines fade in and out; some areas feel more concrete, while other areas are soft and atmospheric, providing a feeling on instability. Strong lighting, harsh shadows and dramatic perspective also contribute to this feeling.

Carly Silverman grew up in Baltimore, Maryland, where she received her BFA from the Maryland Institute College of Art in 2006 and later received her MFA in painting at the School of the Art Institute of Chicago in 2011. She recently completed a residency at the Bemis Center for Contemporary Arts in Omaha, NE., and is currently doing a residency at Chashama in Brooklyn NY, where she also resides. Her work has been exhibited in Baltimore, Chicago, New York, Miami, and San Antonio. 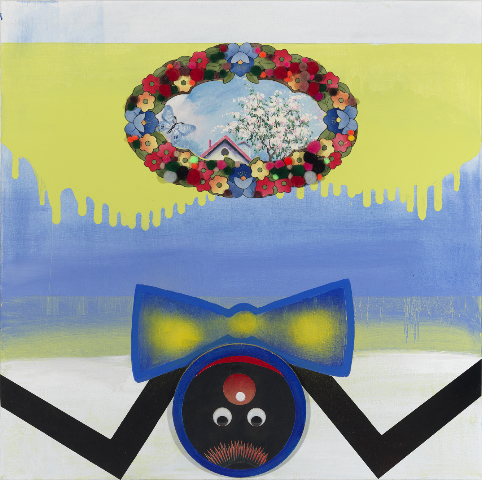