Emerging in the early 1970s, after initially studying as an anthropologist, Hiller is now one of the most influential artists of her generation. Hiller’s output has taken many different forms, and frequently derives from a process of collecting, cataloguing, restaging, and transforming cultural artefacts and experiences as a means of exploring the subconscious and unconscious mind.

Hiller’s practice has infused conceptual and minimalist strategies and aesthetics with the influence of feminism, popular culture and psychoanalysis, creating works in a diverse range of media: notably sculpture, performance, video, photography, drawing and installation.

“To enquire, and to transform” these are the leitmotifs that run throughout Hiller’s oeuvre over a 30 year period, according to curator James Lingwood, who continues, “In a remarkably consistent way, Hiller has sustained an open-ended enquiry into the elusive nature of our selves, the forces at work in the making and re-making of subjectivity and its potential for transformation.” 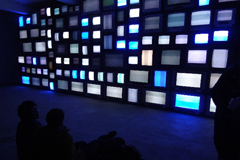