Since the 1970s, Houston Conwill’s art practices, which include painting, sculpture, installation, and performance, have grafted multiple regimes of knowledge onto one another as a means to explore and interrogate the hybrid nature of African American presence in the United States. Commentators, fueled in part by the artist, have routinely construed his work as ritualistic and have characterized Conwill as a kind of contemporary shaman who magically channels both an African past and an African American history as he makes his work. Nelson’s discussion seeks to displace these notions of the artist as a kind of vessel for the articulation of “diaspora” and “memory,” instead recasting his practice as highly the product of rigorous research and intellectual work. In this way, we will begin to understand Conwill less as a kind of modern-day griot and more as a serious artist who actively constructs a diasporic heritage that serves as a revision of standard histories of black experiences.

Steven Nelson is a contributing editor for African Arts, Associate Editor of The Grove Dictionary of Art online, and former Reviews Editor for Art Journal. He is also Treasurer of the National Committee for the History of Art, a member of the General Assembly of the Comité international d’histoire de l’art, and Past President of the Arts Council of the African Studies Association. His book, From Cameroon to Paris: Mousgoum Architecture in and out of Africa (University of Chicago Press, 2007), received an Honorable Mention for the 2011 Arnold Rubin Book Award from the Arts Council of the African Studies Association and the 2009 Alice Davis Hitchcock Award Honorable Mention from the Society of Architectural Historians. Nelson is also co-editor of the exhibition catalogue New Histories (The Institute of Contemporary Art, Boston, 1996). In addition to these books, his writings on the contemporary and historic arts, architecture and urbanism of Africa and its diasporas, African American art history, and queer studies have appeared in anthologies and exhibition catalogues as well as in African Arts, Architecture New York (ANY), Art Bulletin, Artforum, Art Journal, Documents, Journal of Homosexuality, Museums International, New Formations, and Politique Africaine. Nelson has received grants and fellowships from the Getty Research Institute, the Kress Foundation, and Harvard University’s Radcliffe Institute for Advanced Study. He is currently working on two new books titled, On the Underground Railroad and Dakar: The Making of an African Metropolis. Nelson is an Associate Professor of African and African American art history at UCLA. He previously taught at Tufts University and Wellesley College. Nelson earned a BA in studio art from Yale University and an AM and PhD in art and architectural history from Harvard University. 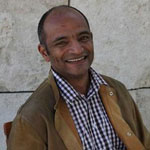