ANDREW RAFACZ is pleased to announce Psychosexual, curated by Scott J. Hunter, in Gallery One and Gallery Two.

Psychosexual explores the constructed, yet unconscious meaning of the physical gesture in contemporary art making, and its intimacy and eroticism. The gesture, across mediums, is first and foremost taken as a representation of the artist’s underlying self, as it is envisioned, fabricated, and then executed. As such, it holds in its execution a projection of the artist’s desires and assertions. Its consequent evocation, in the mind of the viewer of the work, is a representation of the artist’s self; a projective identification by the viewer that is considered, taken in and incubated as memory, and which is then explored, challenged, or discharged. It is the intersubjectivity between artist and viewer that becomes a principal interest in this exhibition; to assess and frame how the artist’s and viewer’s unconscious eroticism becomes both psychologically and aesthetically tangible.

A catalog, with essays by Jason Foumberg, Elijah Burgher, and Scott J. Hunter, is forthcoming during the run of the exhibition.

LUTZ BACHER (American) lives and works in Berkeley, CA and New York. She has had solo exhibitions at Ratio 3, San Francisco; Alex Zachary Peter Currie, New York; and Taxter & Spengemenn, New York; and is currently exhibiting at Portikus in Frankfurt. Forthcoming exhibitions include the Institute of Contemporary Art, London and Kunsthalle Zürich, Switzerland. She had a retrospective at P.S. 1, New York in 2009 and was included in the 2012 Whitney Biennial.

TOM BURR (American, b. 1963) lives and works in Norfolk, CT and New York. He studied at the School of the Visual Arts, 1982-1986. He has had numerous solo exhibitions, including at Galerie Neu, Berlin; Stuart Shave/Modern Art, London; Almine Reich, Paris; and Bortolami, New York. He was included in the recent exhibition, The Black Mirror, curated by James Welling at Diane Rosenstein Fine Arts, Los Angeles.

EDMUND CHIA (Singapore, b. 1977) lives and works in Chicago. He received an MFA from SAIC in Painting and Drawing in 2009 and is currently on the painting faculty. He has been included in multiple group shows in Chicago, including The Mind’s I at Julius Caesar and had a solo exhibition in 2011 with ADDS DONNA.

MATTHIAS DORNFELD (German, b. 1960) lives and works in Berlin. He studied at the Art Academy in Munich, Germany. He has had numerous solo and group exhibitions, including the former Galerie Ben Kaufmann, Berlin/Munich and Rowley Kennerk Gallery, Chicago; Blanket Contemporary, Vancouver, BC; Harris Lieberman, New York; Ancient & Modern, London; and Soy Capitan, Berlin.

JUTTA KOETHER (German, b. 1958) is an artist, musician, and critic living and working in New York, NY. She has collaborated in her exhibitions with Tom Verlaine and Kim Gordon. Solo exhibitions have been held at Bortolami, New York; Susanne Vielmetter Los Angeles Projects; Galerie Daniel Buchholz, Koln/Berlin; and Reena Spaulings Fine Art, New York. She was featured in the 2012 Whitney Biennial and the 2012 San Paulo Biennial in Brazil.

NAZAFARIN LOTFI (Iranian, b. 1984) lives and works in Chicago. She received her MFA from the SAIC in 2011. She has had solo exhibitions at Brand New Gallery, Milan; Tony Wight Gallery, Chicago; and Autumn Space, Chicago; and will be included in an upcoming group exhibition at Ana Cristea Gallery in New York this year.

JEFFRY MITCHELL (American, b. 1956) lives and works in Seattle, WA. He recently had a midcareer retrospective at the Henry Art Gallery at the University of Washington in 2012. He has been featured in both solo and group exhibitions at Ambach & Rice, Los Angeles; Rena Bransten Gallery, San Francisco; White Columns, New York; the New Museum of Contemporary Art, New York; and the Seattle Art Museum.

JOHN NEFF (American, b. 1975) lives and works in Chicago. He received his MFA from UIC in 2001 and he continues to teach in their Department of Art and Architecture. He currently is having his first solo institutional exhibition at the Renaissance Society at the University of Chicago. He has been featured in solo and group exhibitions at GOLDEN, Chicago/New York; the Museum of Contemporary Art, Chicago; the Hyde Park Art Center, Chicago; and Western Exhibitions, Chicago.

RACHEL NIFFENEGGER (American, b. 1985) lives and works in Chicago and Amsterdam. She received her MFA from Northwestern University in 2012, following completing her BFA at SAIC. She has had solo exhibitions at Western Exhibitions, Chicago and Club Midnight, Berlin. She has been featured in numerous group exhibitions including Western Exhibitions, Chicago; Tracey Williams Gallery, New York; the Block Museum of Northwestern University, Evanston, IL; Museum voor Moderne Kunst, Arnhem, NL; and Green Gallery, Milwaukee.

PETER OTTO (Dutch, b. 1955) lives and works in Arnhem, NL. A sculptor and painter, he has had solo and group exhibitions across Europe and in the US, including Devening Projects + Editions, Chicago; Museum Beelden aan Zee, Scheveningen; Boÿmans van Beuningen in Rotterdam; Galerie Swart, Amsterdam; and the Pushkin Museum, Moscow. 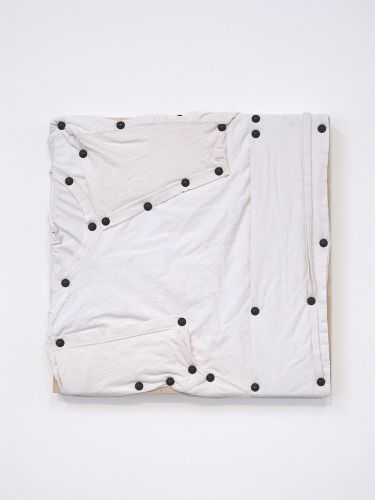