Working in large, room–sized installations, DeVille creates architecturally complex vortexes or “black holes” that employ cardboard, broken furniture and tchotchkes, empty booze bottles, and other discarded objects. Says DeVille, “Garbage is the material container of a specific place and time, and it’s laden with memories, and historical information. Each installation becomes a record of that particular moment and place.” Like DeVille’s previous works, XXXXXXX takes up a dialog with its location, referencing histories of social and cultural oppression, racial discrimination, and the festering bloat of this legacy. A means of spanning time and space, DeVille’s dark structures become metaphorical time warps, a critique of high–capitalist urban decadence, its sagging rot and decline.

During the opening event, Saturday, April 13, artist Abigail DeVille will join Chicago–based artist/filmmaker Cauleen Smith and curator Carrie Schneider in an informal conversation in the gallery starting at 2PM. XXXXXXX runs from April 13 through June 1, 2013.

Abigail DeVille was born in 1981 in New York City. She earned her BFA from the Fashion Institute of Technology in New York, and attended the Skowhegan School of Painting & Sculpture, and received her MFA in Painting from the Yale School of Art in 2011. DeVille’s work has been featured at the Studio Museum in New York, Marginal Utility in Philadelphia, Night Gallery in Los Angeles, the PinchukArtCentre in Kiev, the Stedelijk Museum in Netherlands, and in the exhibition The Ungovernables, the New Museum Triennial, in New York. 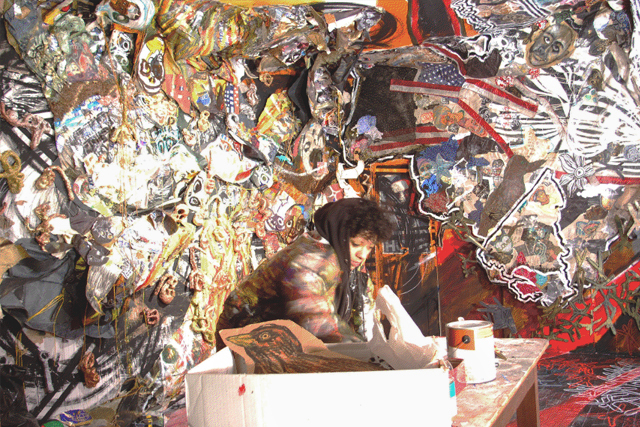