On view through Thursday, April 4th

MARCH 3 – APRIL 7, 2013
PSA Projects is pleased to announce the opening of Chicago Sky Interior by Jovencio de la Paz. The project space will host an opening reception for the public Sunday, March 3rd from 6-8PM. The work will be externally screened Sundays from March 3rd to April 7th for two hours beginning at Civil Twilight. Full details and a screening schedule below.

A child peers through a cardboard tube to playfully manipulate their perception. It is a private exploration, available to one body and one eye in a single moment. Yet to enact this alteration upon the lens of the camera captures the private moment of sight, it further emphasizes our apartness from each other as seeing organisms. In curious transformation, it also makes the captured image into the form of a discrete celestial body—it returns captured light to its heavenly origins in the sky. The playfulness of this act changes as well. In the space of PSA Projects, there are suggestions of voyeurism, of a piercing through the wall and window of the domestic space. There is a violation of the private act of viewing, the gaze of an individual made public.

Jovencio de la Paz is a multimedia artist and writer whose practice deals with finding physical manifestations of metaphysical phenomenon. Working in images, performances, writing, installation and sculpture, he has shown work both nationally and internationally, most recently at the Sculpture Center in Cleveland Ohio, the Cranbrook Art Museum in Bloomfield Hills, Michigan, Roots & Culture Contemporary Art Center in Chicago, Illinois and the Uri Gallery in Seoul, South Korea. He is member and co-founder of the Craft Mystery Cult, a collaborative group with an upcoming exhibition at the Museum of Contemporary Craft in Portland, Oregon. Currently, de la Paz is an Instructor at the School of the Art Institute of Chicago, Department of Fiber and Material studies. 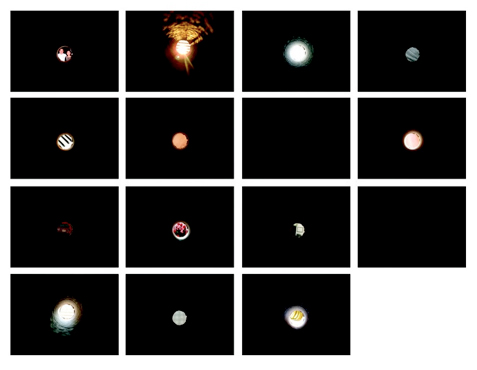