For his first solo show at moniquemeloche, Berlin-based artist Gabriel Vormstein will exhibit a new series of his signature paintings on newspapers both in the gallery and “on the wall.” This will be Vormstein’s first exhibition in the Midwestern United States and the “on the wall” project is only his second large-scale installation to date – the first was his much lauded installation at Artpace San Antonio in 2011. Overlaying the fragile pages from his daily newspaper with a mix of sinuous drawing and watercolor, Vormstein plays with notions of the eternal and the impermanent. He joins art historical references with his own mannerist sensibility, an art specifically emitting from the early 21st century to comment on all that has come before.

The title of the exhibition Tempus fungit – amor mannet is a play on the Latin “Tempus fugit, amor manet” or “time flies, love waits.” Vormstein adds the “n” to further stress themes of decomposition and languid mannerism. This serves as a perfect illustration of Vormstein’s work, made with inherently decaying materials like newspaper, branches, and dried flowers, coupled with lovingly rendered imagery to form a narrative of beauty, affect, and desire.

The public facade of the gallery, our “on the wall” project space, will feature a large, white newspaper collage reminiscent of an aging wall or book cover. By highlighting the facade as the cover of a book, the gallery’s interior architecture becomes a blank page on which set the lyrical story that unfolds within, each artwork a protagonist in the narrative. Whether quoting Egon Schiele figures, Van Gogh’s expressionism, or modernist abstraction, the work here is predominantly painted in muted black, grey, and white, often interrupted with a splash of color. The deliberate use of white over much of the newspaper ground blurs the boundaries between the work and the walls – once again referencing the materiality of the page.

For the first time, Vormstein will also present works utilizing the medium of papier-mâché. By recycling and further disintegrating the newspaper to make a ground for painting, Vormstein stresses the concept of regeneration: that dead material can be used to create new abstract landscapes or a new bare substrate for a narrative. The literal use of book cover imagery in these works asserts the book object itself as a protagonist. Like a story by Jorge Luis Borges, Vormstein suggests the start or end of yet another story embedded within the larger narrative of the exhibition.
Gabriel Vormstein (Born 1974 Konstanz, Germany) studied at the Staatlichen Akademie der Bildenden Künste, Karlsruhe from 1995-2001. He currently lives and works in Berlin. His work has been exhibited at international venues such as Kunsthalle Nürnberg, Magazin Vienna, CCA Andratx, Artpace San Antonio, and the 4th Berlin Biennale as well as group shows at Gagosian and PaceWildenstein. He’s had solo shows in at Casey Kaplan Gallery NY, Meyer Riegger Galerie Berlin, and Almine Rech Paris. The artist was the recipient of the Graduiertenstipendium des Landes Baden-Württemberg Award in 2002 and was nominated for the 2009/2010 Sovereign European Art prize.

We’d like to thank Hamza Walker, curator and Director of Education at the Renaissance Society at The University of Chicago, for participating in an artist talk with Vormstein on Saturday, February 2nd at 1pm at moniquemeloche. This talk is generously supported by Letizia’s Natural Bakery and AAA Rental System in Chicago. 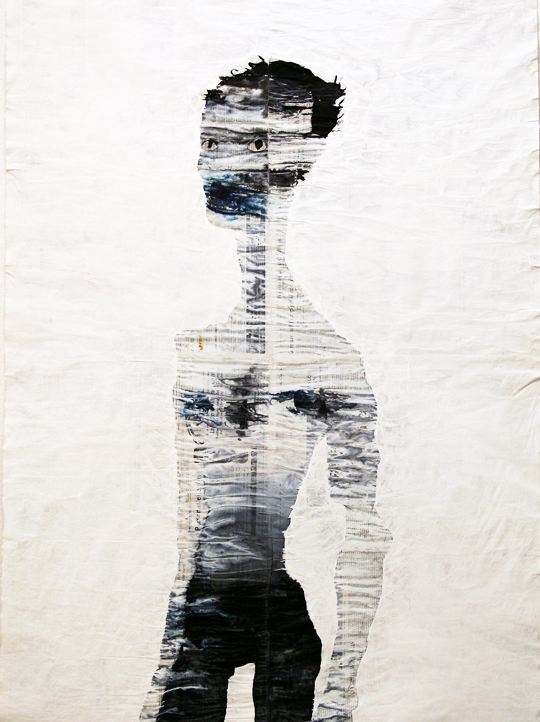