Alibi Fine Art is pleased to announce an Artist Talk and Reading with Fred Burkhart.

Join us on February 23, 2013 to hear Fred discuss his life, some stories behind the work in the exhibition, and tales that he collected while making photographs. Burkhart’s Underground is on display until March 23, 2013.

Also, catch up on some articles covering Burkhart and the show…

Examiner.com piece “Forty years for a first show: Fred Burkhart and his memoir of images” by Liz Baudler

New City feature article “Renaissance Man of the Underground: The Life and End Times of Fred Burkhart” by Bill Hillmann

Listen to Burkhart’s interview on WBEZ’s “The Afternoon Shift” with Rick Kogan.

Fred Burkhart was born in Cincinnati, OH, moving to Chicago, IL after school. Initially a self-taught painter, Burkhart studied from the masters while wandering Chicago’s Art Institute during the days and sleeping in abandoned buildings at night. He was introduced to photography by a friend in 1966, who gave him his old broken camera and said, ‘Burkhart, you should become a photographer’. His fascination with using the camera as a means of understanding and communicating with fringe cultures has lead him to document a variety of marginalized communities. He is founder of the Burkhart Underground, a community that has inspired a new generation of underground artists in Chicago, and has captured the face of Chicago’s underground scene for over 30 years.

Regular Hours – Friday & Saturday 11 AM – 6 PM and by appointment 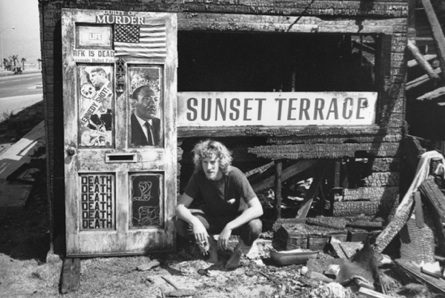