In all her work, Mary Patten seeks to address collisions as well as alignments between the worlds of “politics” and art-making. The frailties of memory, speculative fiction, and the archive of the everyday are all evident in her “singular” work – where she claims authorship, fully aware that there are no wholly original ideas. She continues to be drawn to collective and collaborative forms of art and cultural production in which to re-claim language, feeling, and political passions from fundamentalist thinking, and to reclaim a utopia of the everyday, a way of being together in the world that allows for anger, joy, and reparative visions.

Debuting at threewalls, PANEL is a performance-based, multi-channel video/sound installation, drawn from a transcript of a panel discussion at “Schizo Culture,” a symposium on schizophrenia and radical politics held at Columbia University in 1975. The panel at “Schizo Culture” addressed the relationship between doctors, the medical profession, and torture, and coercive uses of therapy in prisons and mental institutions. Speakers included philosopher Michel Foucault, radical psychiatrist R. D. Laing, the Insane Liberation Front’s Howie Harp, and radical activist Judith Clark. PANEL re-imagines the architecture of academic and political conferences, where discourse is shaped by such things as panel, podium, microphone and stage. It conjures the spaces of incarceration and repressive institutionalization, then and now, and an imagined 1975 audience of intellectuals, artists, and political activists. Video projection, digital imaging, and audio re-vivify an obscure, yet potent 1970s text whose contents are eerily relevant to the torture “debates” of the present moment.

PANEL is experimental in form, yet legible as political inquiry. The fragmented nature of the manuscript reinforces a sense that the panelists were not engaging one other. Patten imagines them as ghosts in separate spheres, arranged in a line and facing an audience that has largely disappeared. PANEL extends the metaphors suggested by “Schizo-Culture” by creating four hallucinatory clouds that intermittently interfere with our reception of each speaker: a swirl of moving collage, a kind of “dreaming out loud” by each of them–the philosopher, the radical psychiatrist, the revolutionary prisoners’ advocate, the Insane Liberation Front activist. These “clouds” intermittently interrupt and blur the panelists’ contentious, pensive, persuasive, or rambling speech acts. The installation invokes the air between a dense piece of ephemera that has slipped through historical cracks and its collective address to what was once a massive social movement.

Mary Patten is a visual artist, video-maker, writer, educator, occasional curator, and political activist. For over 25 years, she has exhibited installations, videos, drawings, prints, and public collaborative projects locally, nationally, and internationally at venues ranging from the Chicago Cultural Center, Gallery 400, Northern Illinois University Art Museum, the Hyde Park Art Center, DOVA Temporary, Randolph St. Gallery, Creative Time (with Feel Tank Chicago), Art in General, The Cooper Union, the New Museum in NYC, Shedhalle/Zürich, the Rotterdam International Film Festival, London Lesbian and Gay Film Festival and the Hong Kong Lesbian and Gay Film Festival. Her book Revolution as an eternal dream: the Exemplary Failure of the Madame Binh Graphics Collective was published by Half Letter Press in 2011. She has also published in Radical Teacher, AREA Chicago, Prompt, The Passionate Camera (ed. Deborah Bright) and WhiteWalls. Online artist’s projects include “TERROR-ist?” and “Experiments in Living.” Patten has directed and participated in many large-scale collaborative art projects for over thirty years, including the Chicago Torture Justice Memorials project , Pathogeographies , Project Enduring Look, billboards with ACT UP/Chicago, Artists’ Call against Intervention in Central America, Action against Racism in the Arts, and Cityarts Workshop. Some of her videos are distributed by the Video Data Bank. She has won fellowships from Artadia, the Illinois Arts Council, the NEA, and many others. She teaches in the Film/Video/New Media/Animation Department at the School of the Art Institute of Chicago. 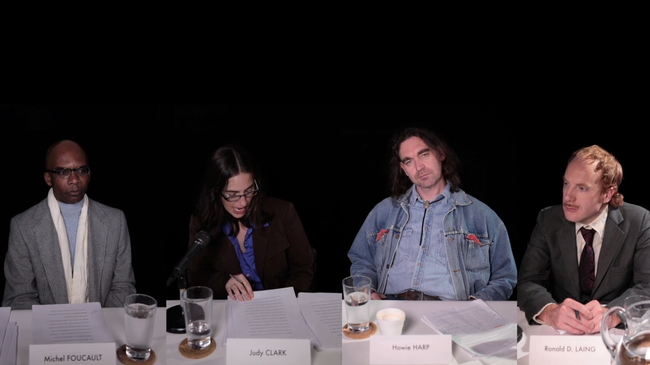