On view through Saturday, February 2nd

A performance of exposures, constructed over the past four years, “Waterhome” is a series of choreographed aesthetic procedures in reaction to a contained natural phenomena; it is an ongoing work with the memory of its own making, its own being and its own entropy. The work began in 2008 with an empty glass aquarium, a representation of nothingness that soon began to grow algae and destroy the purity of its void. Taking the aquarium and its ceaseless production as a cue, the resulting paintings are accretions made apparent through the structural flaws of the canvas support; sending what would be a monochromatic surface through the rabbit skin glue treated canvas as if it were a sieve or a screen. A blind abstraction of anachronistic variable derives from a casual yet causal performance of a repeated set of gestures. As representation and as subject this act, that only ceases beginning so as to begin again, performs a failure to depict a perfectly negative gesture. The work inhabits a desire to create a frame for a subjectivity that comprehends the inconclusiveness of transparency.

James Krone (b. 1975 in Chicago) lives and works in Berlin. This is the artist’s third solo exhibition with Kavi Gupta. Recent and forthcoming exhibitions include “Beyond The Object” (2013) at Brand New Gallery in Milan, “Elipsis et cetera” (2012) at Galerie Charim in Vienna, “The Paranoia Of Time” (2012) at Carter & Citizen in Los Angeles, “Sea of Crisis” (2012) at Infernoesque, Berlin and “Waterhome” (2012) at Kavi Gupta, Berlin. Krone’s work has been reviewed in many international art publications including ArtForum, ArtUS, Artslant and Monopol. 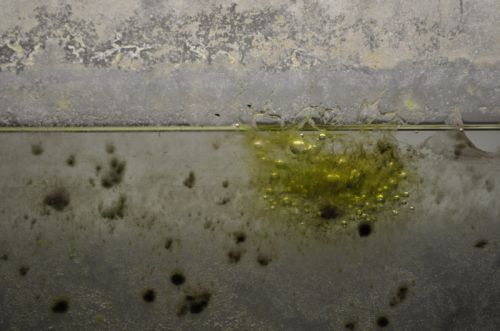