Allison Wade: The Rest of the More & Nick Ostoff: Tracing

On view through Saturday, January 26th

devening projects + editions is pleased to announce the opening of The Rest of the More, an installation of new sculpture by Chicago artist Allison Wade. In the off space, Nick Ostoff is featured in Tracing, a solo show of his most recent paintings and works on paper. Please join the artists for an opening reception on Sunday, December 16th from 4 – 7pm. The exhibition will continue until January 26, 2013.

Drawing from a stockpile of hand-made and found objects, Allison Wade constructs tenuous, straightforward arrangements of unexpected juxtapositions. The work relies heavily on balance and tension; there’s a strong focus on where and how materials meet. Simultaneously aware of the specific relationships of the parts and the coherence of the whole, the viewer senses a new grammar, one that is open to interpretation. An ongoing interest in language structures-specifically syntax, conjunction, and parataxis-also informs the work. The Rest of the More, the title of the exhibition, comes from a conversation with a Finnish friend offering Allison the remainder of his leftover soup. Both an act of generosity and a unique turn of phrase, this expression conveys the ethos of the work presented here: a resourceful, idiomatic approach to making that reveals its own intuitive logic while inviting investigation. www.allisonwade.com

Allison Wade received her MFA from the Department of Fiber and Material Studies at the School of the Art Institute of Chicago, earned her BA in English literature from Stanford University and completed the post-baccalaureate program at Maryland Institute College of Art. She has been granted residencies at Mustarinda (Finland), ACRE and the Vermont Studio Center, for which she was given a Joan Mitchell Foundation Fellowship. She is the recipient of an Edes Foundation Semi-Finalist Prize, Clare Rosen and Samuel Edes Foundation Prize for Emerging Artists awarded through the School of the Art Institute of Chicago. Her recent projects include exhibitions at Adds Donna, LVL3 Gallery and the MDW Art Fair with The Salon Series in Chicago; and the HF Johnson Gallery of Art, Carthage College, Kenosha, WI. She is currently an adjunct professor at Carthage College in Kenosha, WI. She lives and works in Chicago.

In the off space, Nick Ostoff is featured in Tracing, a solo exhibition of new paintings. In his work, Ostoff focuses on quotidian elements found in everyday life; through the process of painting, he transforms that overlooked and familiar visual phenomena in order to suggest some evidence of absence. The work uses tracing as a metaphor for a practice arrived at through visual selection, editing and transcription, rather pictorial invention. Each painting re-presents a fragment of an activated surface found within the quotidian sphere, ranging from textile patterns on household objects, to spray-painted marks on city streets, to cast shadows, to the incidental paint stains formed through studio activity. Often, the visual information is located on the margins of the picture plane, leaving a blank and voided center. The resulting paintings become traces of other traces, in which each brushstroke functions in a double register: ostensibly signifying the immediacy of the painterly process, while pointing to an original found mark-a referent that is already a temporally-distant trace. Ultimately, his aim is to use the vernacular of abstraction to suggest absence, loss and his own doubts about the primacy of authorial gestures.

Nick Ostoff was born in Los Gatos, California and spent much of his life in Toronto; he currently lives and works in Chicago. He received a BFA from the Ontario College of Art and Design in 1999 and an MFA from the School of the Art Institute of Chicago in 2012, where he also won the George and Ann Segal Graduate Fellowship. He has received numerous grants and fellowships and his work has been reviewed in such Canadian periodicals as the Globe and Mail and Canadian Art Magazine. His work was recently included in group shows at Zolla/Lieberman Gallery (The Question of Their Content) and Adds Donna (duck/rabbit). Nick Ostoff is represented in Toronto by Diaz Contemporary; Tracing is his first solo exhibition in Chicago. 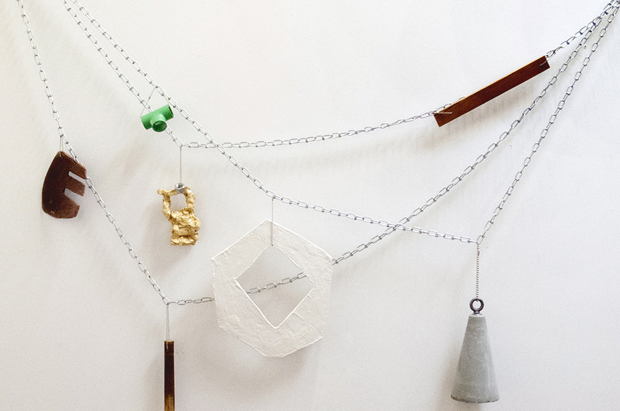