A Painting Show (in two parts)

In the spring of 2011 Harris Lieberman Gallery inaugurated their new gallery on 26th Street in Chelsea with an ambitious painting exhibition titled “A Painting Show.” The press release read:

“This group exhibition includes 35 artists and charts spheres of influence among a group of painters with diverse artistic approaches. All the artists share a rigorous conceptual grounding and an interest in the act and materiality of painting. They translate and transform art historical, philosophical, and lyrical ideas into works that invite both analytic and sensory consideration, while requiring our utmost engagement.

“The painters in the exhibition span several generations- many are notable for painting during periods when it was not a favored medium. These artists’ influence can be seen in the work of the show’s younger participants who elaborate on and contend with the projects of the more established artists. Conceived as a celebration of contemporary painting, the exhibition is a snapshot of individual artistic practices rather than a broader thematic statement. Moreover, it is an invitation for further consideration of painting today.”

Oddly there was no mention that the exhibition was comprised entirely of paintings produced by women. In a review of this exhibition in Art in America Faye Hirsch writes:

“I am among those who believe the greatest painters working today, at least in the U.S., are women. I’m not sure why that is, or even whether it merits articulating further. But I don’t understand why we can’t say it directly.”

I was proud to be included in this exhibition yet I am still not able to strategically comprehend why the exhibition organizers, women themselves, choose not to frame this impressive undertaking for what it was. I can only guess that its location in a commercial gallery required that its powerful critique be relocated to a scant exhibition subtext so as to leave consumers untainted by the gross gender inequality gripping the contemporary art apparatus.

“A Painting Show (in two parts)” furthers the conceit of a “celebration of contemporary painting,” and “a snapshot of individual artistic practices.” Yet as the show’s organizer, I am interested in delivering compelling contemporary painting and putting forth a discussion on gender, age, the expressive mark, privilege and the painter’s imagination. In addition to platforming four male painters, including my husband, I have also selected artists who are solidly engaged in mid-career practice. In other words, if my husband had his way, this exhibition would be titled, “Men of a Certain Age.”

Paul Bloodgood was born in 1960 in Nyack, New York, and currently lives and works in New York City. After receiving a B.A. in painting at Yale University in 1982, he spent four years living and painting in rural parts of Maine and New Hampshire. He moved to the Lower East Side in 1986. For five years he worked for an artist-owned art moving company and in 1990 (along with his fellow art-movers) was a co-founder and the curator of New York’s influential AC Project Room, an artist-run commercial gallery that introduced the work of many significant young artists such as Byron Kim, Doug Aitken, Luca Buvoli, Josiah McElheny, Jane and Louis Wilson, and Anne Chu, as well as unrepresented older artists such as Mary Beth Edelson, Kim Jones, Robert Breer, Michel Auder, and Isa Genzken. In the 1990s his work was shown in New York at both Gavin Brown’s enterprise and 303 Gallery, during which time he also made an artist’s book of his text collages for Matthew Higgs’ ‘Imprint 93’ publishing project. The AC Project Room closed in 2001 and Paul Bloodgood focused on his own work and teaching, and in 2002 received an MFA from the Maine College of Art. In 2008 he showed in a three-person show at David Zwirner, a group show at Wilkinson Gallery in London curated by Matthew Higgs, and in a two-person show with Michel Auder at Newman-Popiashvili Gallery where he is represented.

Michael Byron was born in Rhode Island and received his MFA from the Nova Scotia College of Art & Design in 1981. His inclusion in the Museum of Modern Art’s “An International Survey of Recent Painting and Sculpture” in 1984 marked the beginning of his participation in museum exhibitions in North America and Europe. His work is in museum collections such as the Whitney Museum, the Museum of Modern Art, the Tamayo Museum, Mexico City and the Museum Boymans-van Beuningen in Rotterdam, the Netherlands among others. Byron, self-described as “internationally obscure”, has lived and worked in New York City, Amsterdam, the Netherlands and Cambridge, Massachusetts. He currently teaches at Washington University in St. Louis.

Patrick Chamberlain was born in Vancouver, Canada. In his paintings he revels in a play with painting conventions, and takes joy in the medium’s mutability. From the age of three he was raised a Jehovah’s Witness which religion he left in his mid-twenties after reading Heidegger’s “On the Essence of Truth”. His experience negotiating freedom within the structure of the Jehovah’s Witness religion informs his understanding of the dialectics of freedom and constraint within a secular culture. He sees his painting as a material expression of the exploration of pleasure, desire, freedom and constraint. He considers himself a modest but consistent partisan of the enlightenment, and a modernist of a catholic persuasion.

Brad Killam (born in Park Ridge, IL) received his MFA from the University of Illinois-Chicago in 1993. He has exhibited regularly in the United States and Europe, most recently at INOVA, Milwaukee; Gallery 16, San Francisco; Leo Koenig Inc. Projekte, NY; Julius Caesar, Chicago; and Tanzschule Projects, Munich. Together with Michelle Grabner, Killam operates the artist spaces, The Suburban in Oak Park, IL and the Poor Farm in Northeastern Wisconsin. He lives in Oak Park, IL and works in Little Wolf, WI. 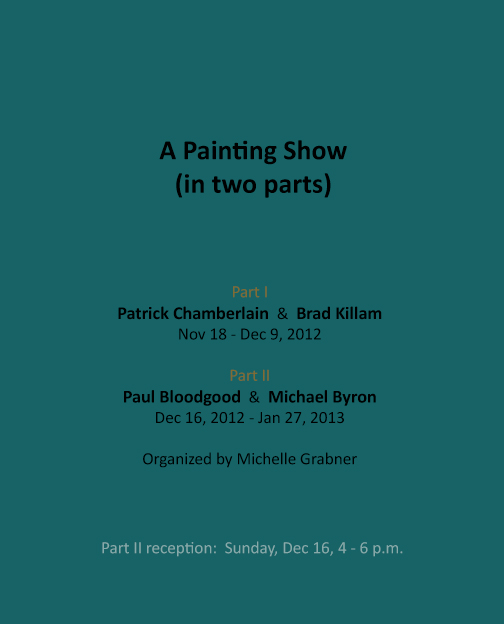