Mr. Madoff received his B.A. in English from Columbia University in 1976 and studied toward a doctorate in English at Stanford University (M.A. 1979; A.B.D. 1981). He served as the executive editor of ARTnews from 1987 to 1994 and has written on art for Time magazine, The New York Times, Artforum, Art & Auction, and Modern Painters among many others. His recent books include Art School (Propositions for the 21st Century) (MIT Press); Christopher Wilmarth: Light and Gravity (Princeton University Press); and Rebecca Horn: Moon Mirror (Hatje Cantz), coauthored with Doris von Drathen. He is also the editor of Pop Art: A Critical History in the series Documents of Twentieth-Century Art (University of California Press). His poems have been published widely and are gathered in the volume While We�??re Here (Hard Press). He is at work on a new book on interdisciplinary art. Mr. Madoff was appointed critic in painting/printmaking in 2005 and senior critic in 2006 at Yale University. 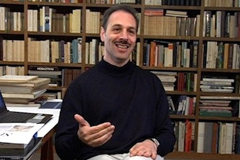