Iceberg Projects is pleased to present Country Girls, the first US solo exhibition for South African artist Sabelo Mlangeni (born 1980 Driefontein, South Africa, lives Johannesburg), which is only the third showing of his work in the US, and the first in Chicago. Country Girls is an intimate portrait of gay life in rural South Africa, with the photographs — 31 silver gelatin prints shot by Mlangeni over the course of six years (2003–2009) — acting as records of expressions of queerness in a generally repressive environment.

Country Girls is set against a backdrop of dusty villages not far from Mlangeni’s own hometown in Mpumalanga province. In the exhibition catalog Graeme Reid, lecturer in LGBT Studies at Yale University writes, “Mlangeni took the photographs in small towns and rural areas in
the Mpumalanga province: Driefontein, Ermelo, Bethal, Piet Retief, Standerton and Sekunda — nodes of mining, agriculture, forestry, and coal-fed power stations. [ ] These can be bleak environments where, by and large, township life is rough and poor. But there is also glamour here. Mlanageni brings us images of drag queens, hairstylists at work and beauty pageant contestants parading in an unadorned municipal hall. These are scenes of aspiration, of making do, fashioning a dream from what is available. [ ] Fashion and gay life go hand in hand in Mpumalanga. In fact it is not uncommon to hear of gay lifestyles referred to, with some isapproval, as ‘a fashion’, a modern phenomenon. To some, gays are seen as un–African, un–Christian or the unfortunate by–product of a liberal constitution. But, as the photographs vividly demonstrate, this is only a small part of the story…”

During the opening event, Saturday, November 10, exhibition curator Carrie Schneider will join Antawan I. Byrd, Doctoral Student in Contemporary African Art at Northwestern University, and former Curatorial Assistant at the Centre for Contemporary Art in Lagos, Nigeria, in an informal walk–through of the exhibition starting at 6:30PM. Country Girls runs from November 10 through December 16, 2012.

Sabelo Mlangeni (Born 1980 in Driefontein, South Africa. Lives in Johannesburg) moved to Johannesburg in 2001 where he joined the Market Photo Workshop, graduating in 2004. He won the Tollman Award for the Visual Arts in 2009. His first solo show, Invisible Women, took place at Warren Siebrits, Johannesburg (2007). Important group exhibitions include Rise and Fall of Apartheid: Photography and the Bureaucracy of Everyday Life at the International Center of Photography in New York (2012), The Unexpected Guest Liverpool Biennial, UK (2012), the 9th Rencontres de Bamako African Photography Biennal in Mali (2011); the Lagos Photo Festival, at the Centre for Contemporary Art, Nigeria (2011); Figures and Fictions: Contemporary South African Photography at the V&A Museum, London (2011); and I am not afraid: The Market Photo Workshop, Johannesburg (2010). 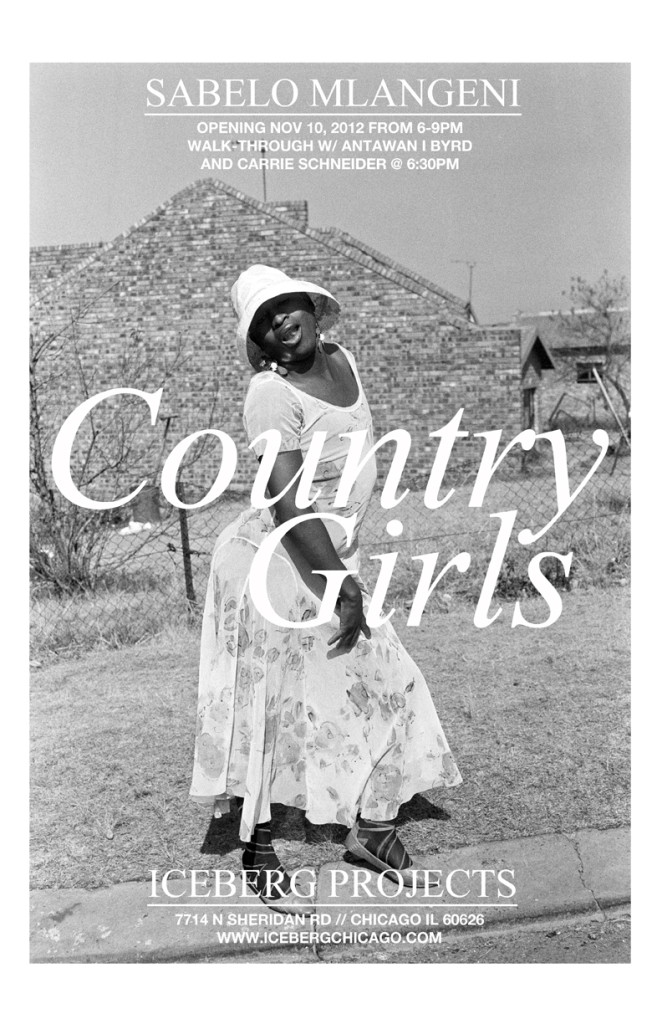