Renovar: On the Origin of Species

On The Origin of Species
Renovar Spring 2013

“There is grandeur in this view of life, with its several powers, having been originally breathed into a few forms or into one; and that, whilst this planet has gone cycling on according to the fixed law of gravity, from so simple a beginning endless forms most beautiful and most wonderful have been, and are being, evolved.”
Charles Darwin

On the origin of species examines new ideas of god as creative power and art as evidence for creation, while seeking reconciliation between Darwinian evolution and human creation. The show examines the duality of a natural world and a human created world modeled after nature with altered concepts of evolution as creation over time and natural selection and heredity as a mechanism for creative power. The work explores transformations after billions of years, from cell to plant to animal, to conscious beings, claiming man as lineal descendants of creation and pure consciousness. It investigates principles of inheritance, created potential and the human imagination that lead to hereditary modifications engineering mankind to create art and construct meaning. The idea that art mimics creation is manifest in man’s fulfillment in the creative ritual and this act of creation as a sacred act of worship.

Based on the work of Naturalist Charles Darwin, who sought to uncover the mysteries of the earth with his theory of natural selection in which the environment acts as a sieve through which only certain variations can pass, he was left to wonder why natural selection’s unerring power should choose preservation of favorable variation and the question of heredity. He revolutionized biology proposing that all species have a common ancestor, disproving the biblical story of separate creation. Today Darwin is seen as a symbol for atheism however he was not a crusader against religion but rather a lover of science. In 1859 when Origin of species was published he was a theist, then later he became an agnostic but never an atheist.

This season life blossoms from a variety of pattern on pattern, with bold floral, 80’s abstract and animal prints. The show highlights Darwin’s five year voyage on the H.M.S. Beagle where he found luxurious vegetation and a wide variety of species. The Collection includes blouses with printed illustrations of species taken from from Darwin’s books and reconstructed vintage silk clothing, where a 80’s silk printed skirt evolves into a blouse and 90’s silk dress into a skirt. Nature selects simplistic cuts in saturated color and rudimentary animal tails on beautiful woman.

This will be the fifth collection for Alma Wieser of Renovar, her other shows include, “Chanel Versus Schiaparelli”, “Irregular” an homage to Japaneses designers and “Model Assemblage”, based on artist Louise Nevelson. She is the art director at heaven gallery where she she divides her time between Vintage Heaven, art exhibitions and her clothing line Renovar. 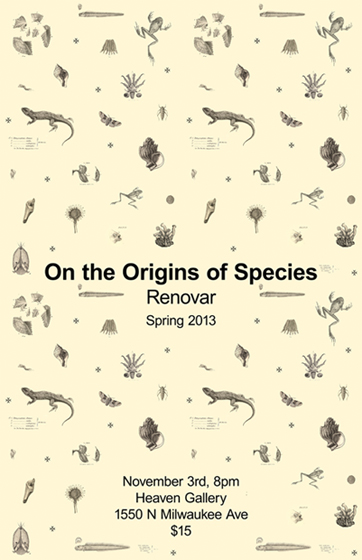