On view through Thursday, December 27th

Phyllis Bramson
In the South Gallery: Coupling Displays and Dalliances of a Romantic Nature

Image / Clot presents the work of artists who work in a variety of media, and create art with references to genres such as the portrait, figure, and landscape to varying degrees. Each, however contests and embellishes the recognizable imagery by physically and visually cutting and reconfiguring, by adding appendages or eliminating sections by means including interrupting clots and drips and bleeds of paint. The tension and surprising visual juxtapositions and combinations these strategies create results in powerful works that know how to throw a visceral & visual punch. The artists accomplish this with intelligence and acuity, creating work filled with humor, high and low cultural references, mysterious narratives, and an adventuresome use of media.

Dan Mills is an artist and director of the Bates College Museum of Art. Mills had solo exhibitions at Zolla/Lieberman Gallery (7-8.12), the Chicago Cultural Center (7-9.12) and currently at MetCap Bank in Chicago.

J. Fiber is the collaborative name of artists James Esber and Jane Fine. Esber is known for distorting the familiar—portraits, figures, scenes, etc. —with a psychedelic palette morphing cartoon-like figurative images and events in paint, color pencil drawings, and color plasticine reliefs that are attached directly to the wall. Fine makes color-saturated abstract paintings inhabited by forms created with blocks and blobs of painted color, and lively doodley black and white lines forming amorphous flowers and beams and other appendages.

J. Fiber melds the two in ways reminiscent to how opposing sides combine when at war, with Esber’s figures fighting to dominate the field, and Fine’s forms clotting and spilling into Esber’s imagery, at times triggering shock at others awe.

Brad Kahlhamer fuses Expressionist painting with comics, street culture, and the visionary tradition of Native American art to create powerfully narrative work that hovers between autobiography and invention. Kahlhamer, who is Native American, was born in Arizona and adopted as an infant by a German-American family, and grew up with no connection to his heritage. His drawings, paintings, prints, and sculptures fuse lived experience with learned knowledge of his unknown ancestral past and things imagined into an alternative world, where they exist in permanent dialogue.

Kahlhamer’s large works often depict epic scenes featuring players including javelinas and other animals dead and alive, people (often including the artist), graffitied notes and doodles, set in landscapes featuring skies and mountains and clots and large brushes of paint. His smaller drawings and objects are often presented as installations.

In Johan Nobell’s paintings, representation and abstraction confront one another in visually subversive ways: mountains and buildings sport eyes, foliage transmogrifies into creatures, brushstrokes seem to form into menacing monsters, and smokestacks billow skull-shaped plumes. Every form, line and mark seem to be coming to life or about to animate in Nobell’s surrealistic landscape paintings. His brushstrokes and marks and abstract forms have a cartoon-like presence, and the unexplainable scenarios he paints are simultaneously playful and utopian, and convey an uneasiness bordering on eminent doom.

Nobell is often considered one of Scandinavia’s most original painters and has developed a pictorial language that is very much his own, an artistic project hat articulates an alternative to the mainstream where a lot of contemporary painting is to be found.

Nicky Nodjoumi incorporates disparate elements of culture, subject, and modernist styles into paintings and drawings inhabited by Middle Eastern and Western archetypes of authority, stock characters, recognizable people, animals, and a few props set on a shallow stage. In his odd and captivating tableaus, figures are cut into horizontal parts and restacked with one another or disjointedly recombined with each section painted in a different palette or style. Nude and clothed figures perform peculiar routines and gestures, mirror or contrasting events take place in underworlds at the base of his paintings, in front of brushy and paint splattered backgrounds. Political and social conflicts are suggested, and if figures of authority are present, Nodjoumi pokes fun at them in inventive, amusing and disturbing ways.

The layering in Gail Skudera’s work is almost limitless. Physically she constructs work by combining multiple layers of mostly two-dimensional materials including paper, clear films, and printed and woven fabric. Her primary image is often a portrait, and her starting point photographic images from other eras.

Skudera investigates her photographic subjects by blowing them up and transferring them onto paper, fabric, and films, then painting lines over, drawing beneath, and bleeding color on top and underneath and between surfaces. She cuts apart and tears into the materials and images, then reconstructs them through collage, weaving, and sewing, sometimes incorporating fasteners and other objects into the work. When completed, the portraits are a small component of the works of art, but remain a powerful force, peering back at the viewer through drips, stains, and ghostly lines of their distant and recent history.

In the south gallery, we are proud to announce Coupling Displays and Dalliances of a Romantic Nature, an exhibition of works on paper by Phyllis Bramson. In Bramson’s narrative drawing project, burlesque like theatrical incidents are disturbingly idyllic and dally in material pleasures. 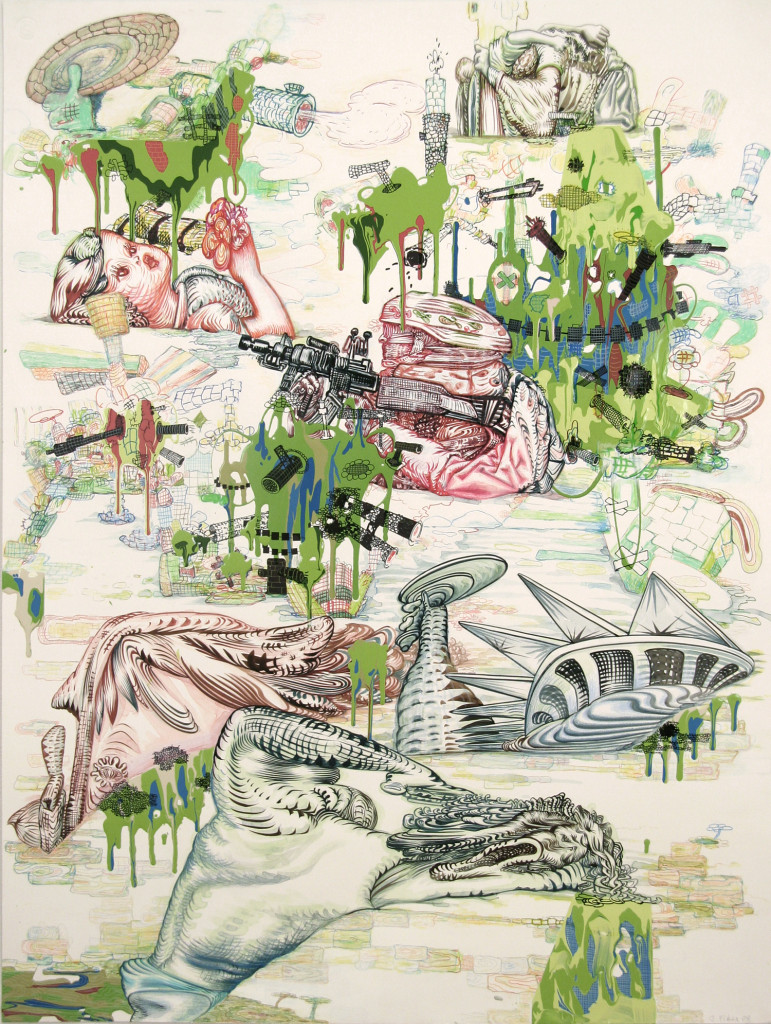