SIMPARCH’s sculptural installations blend art, design, and architecture, and often involve public participation. Their breakout project, Free Basin—a luscious sculpture installation and functioning skate bowl—was commissioned for the Hyde Park Art Center in 2000 by Hamza Walker and recreated at Documenta XI (2002); The Renaissance Society (2001), Deitch Projects (2002), and Yerba Buena Center for the Arts (2004). They have beenfeatured at the Whitney Biennial (2004), Tate Modern (2005), and The VeniceBiennale of Architecture (2008). SIMPARCH was founded in 1996 by Steven Badgett (b. 1962, based in Chicago, IL) and Matt Lynch (b. 1969, based in Cincinnati, Ohio).

CHRIS VORHEES (b. 1972, based in Cincinnati, Ohio) is a sculptor and furniture maker who brings exquisite craft skills and a deep sense of play to his projects. Vorhees’ solo work has been shown at the Henry Art Gallery (2002), Bard College (2003), the Illinois State University Art Gallery (2004), New Gallery for Contemporary Art, Louisville (2007) and the Herron School of Art and Design (2010). He was awarded the Efromson Family Fund award in 2010.
So this week is flying by and we haven’t found time to get those beers? how about a pre/post cocktail around the Expo? Have a few other ideas to share.

* As part of our Threshold series, the collaborative team of Chris Vorhees and SIMPARCH transform the Smart Museum’s reception hall into a fantastical domestic landscape.

Uppers and Downers reworks the familiar kitchen setup of cabinetry, countertop, and sink into an abstracted version of a massive rainbow arching over a waterfall. This kitschy natural scene plays upon the utopian promise that restraint yields bliss: if only you eliminate excess and organize clutter to hide messy reality behind stylish surfaces, then happiness will follow. Or perhaps not. Uppers and Downers draws equally on the history of twentieth-century sculpture and design and the twenty-first century problem of accumulation. This site-specific work showcases the artists’ seriously playful aesthetic, expert craftsmanship, sensitive reworking of everyday materials, and capacity to transform the ways people interact with and within architectural spaces. 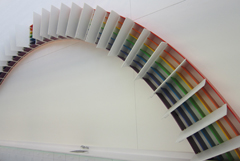