65GRAND is pleased to present Philip von Zweck in his second solo exhibition with the gallery. Since the 1990’s von Zweck has gained recognition for his conceptual gestures that can always in some way be considered in relation to the conditions of network. Von Zweck plays off of the highly coded conditions of the contemporary art world with a frequent attempt to move the discourse out of the insular system and into culture at large. The result being a diverse body of work ranging from experimental radio broadcasts to paintings, to participatory works informed by the strategies of post-conceptual art.

The works included in this exhibition stand as discrete pieces of art, but also bear the traces of von Zweck’s collaborations, relationships and connections with artists and other cultural producers that brought them about. The pieces vary greatly, from a newsprint catalog designed by John Kannenberg with essays by Anika Marie and Brian Taylor, to an intervention involving the architecture of the building where the gallery is located. From a painting executed by von Zweck to a cardboard box used as target practice by a group of artists.

Philip von Zweck lives and works in Chicago, Illinois. Solo exhibitions and projects include Where Do I Get an Image of Yes (with Andreas Fischer), Important Projects, Oakland, in 2012; Performa 11 at INVISIBLE-EXPORTS, New York in 2011; The Fortieth Anniversary of the First Anniversary of May ’68 (in September), Three-Walls, Chicago in 2009; and Post, the Museum of Contemporary Art, Chicago (2007). Selected group exhibitions include Artists Run Chicago, Hyde Park Art Center in 2009; and Heartland, Van Abbe Museum, the Netherlands in 2008. Presently von Zweck is organizing a series of conversations and discussions with Claudine Ise for Gallery 400 entitled Public Hearings. 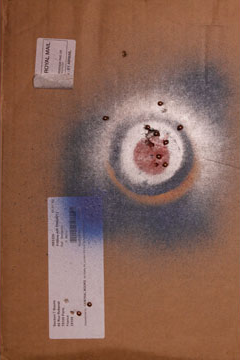