Doug Ischar, the recent recipient of a spot on Newcity Magazine’s list of the Top 50 Chicago Artists (see #28), presents a collection of short experimental work including a World Premiere of his newly finished piece, Tristes Tarzan. Innovative and visionary, local filmmaker Doug Ischar has worked in sound, video, and photography since the early 1990s. His work has evolved from large-scale multimedia installations to single-channel videos that address issues surrounding gay identity, desire, and loss. Currently an associate professor of photography at the University of Illinois, Chicago, he has exhibited at museums and galleries throughout the world. Ischar will be in person to lead a discussion and Q&A following the screening.

Doug’s thoughts on his work, a Chicago Filmmakers exclusive:

brb (2007) The tableau constructed from a vehicle’s window, traveling just pre-dusk, serves as setting for an infatuated online conversation between the artist and an unnamed lover. The transcript alludes to their earlier, yet still ongoing, intimacy touching on moments of dependency, love, lust, pain and pleasure in pain. As the sun continues to set, and the car continues on its journey, the conversation becomes increasingly obsessive and repetitive as if each knows that this chat will be their last, as Ischar reports it was. There are various apparent endings which turn out not to be and the participants’ reluctance to part further underscores the scene’s finality. In this video – between the participant, artist, and viewer – a tripartite relationship inflected with confession, voyeurism and melancholy is manifested. – D.I.

come lontano (2010) is a perverse historical romance in which two lives are inter-mixed, doused with sentiment, and – hopefully – redeemed. The work revolves around an unlikely couple – Paolo Pasolini and Maria Callas. There is also a symbolic villain, Pasolini’s Alfa Romeo roadster in which he famously cruised for street trade and which was used to murder and mutilate him. come lontano’s first section is titled ‘alfa.’

In come lontano, cinematic tropes are recuperated as emotional nodes. Its maker hates the Post-Modern notion of ‘appropriation.’ He prefers more fundamental concepts like theft, seduction, and passion – even if the theft is aggravated, the seduction botched, the passion unrequited. One might view the film as a meager analog to Pasolini’s masterpiece, Salo, in which the pleasures of the masters – in this case the filmmaker – are taken to monstrous extremes for which no apology is offered, no acquittal sought.

come lontano is a heartfelt homage to two singular artists whose utterly different lives, personas, and politics intersected briefly in the production of one radiant film, leaving them both forever changed.

The film is based largely on found materials: footage from Pier Paolo Pasolini’s 1969 Medea (staring Maria Callas) and numerous photographic sources, i.e. books, paparazzi photographs, etc. Rare silent footage of Callas performing Luigi Cherubini’s opera, Medea, concludes in the film’s third section. Only in the final section does original footage come into play. come lontano is in four sections, each with it’s own discrete qualities. It is modeled more after Modernist musical examples than after avant-garde cinema – formally, the film is very much a study in ‘composition.’ The title itself is a rare musical performance indication, meaning to ‘make sound as if in the distance.’ – D.I.

At the heart of Alone With You (2011) is the notion of impassioned avarice, i.e. the kind of motivated acquisitiveness that often drives both erotic desire and obsessive collecting. ‘Alone…’ is built around two main characters, a hot young pro- wrestler – the maker’s object of desire – and Robert Mapplethorpe, the artist/collector par excellance, who serves as both alter-ego and nemesis for Ischar himself. But there are no neatly contained categories here and elements slip constantly between the various qualities of compulsion/compassion being explored. ‘Alone…’ is a densely ‘vertical’ work, its use of superimpositions and shifting frame sizes giving it an almost ‘anti-cinematic’ quality. The work is roughly divided into two parts with the second section re-shaping and re-employing elements from the first. – D.I.

Tristes Tarzan (2012) melds two ‘son of tarzan’ movies into a five-part work based on variation form. Music is – even more than usual for Ischar – the conceptual template here. Edward Elgar’s 1899 “Enigma Variations” is both the musical crowning glory of the British Imperial age as well as a sort of group portrait of his closest friends, each variation corresponding to a separate friend. Tristes Tarzan is in five sections, each linked to one of Ischar’s close friends, namely Steve Reinke, Mark Aguhar, John Neff, Elijah Burgher and his partner, Tom Daws. Despite the mostly ‘male’ dedicatees, Tristes Tarzan is also Ischar’s deepest engagement to date with female characters, something in keeping with the work’s dedication to his recently deceased friend and student, Mark Aguhar. The work’s two central sections are built of broad emotional strokes and distinct passions while the remaining three are more lapidary in form and mercurial in mood. – D.I. 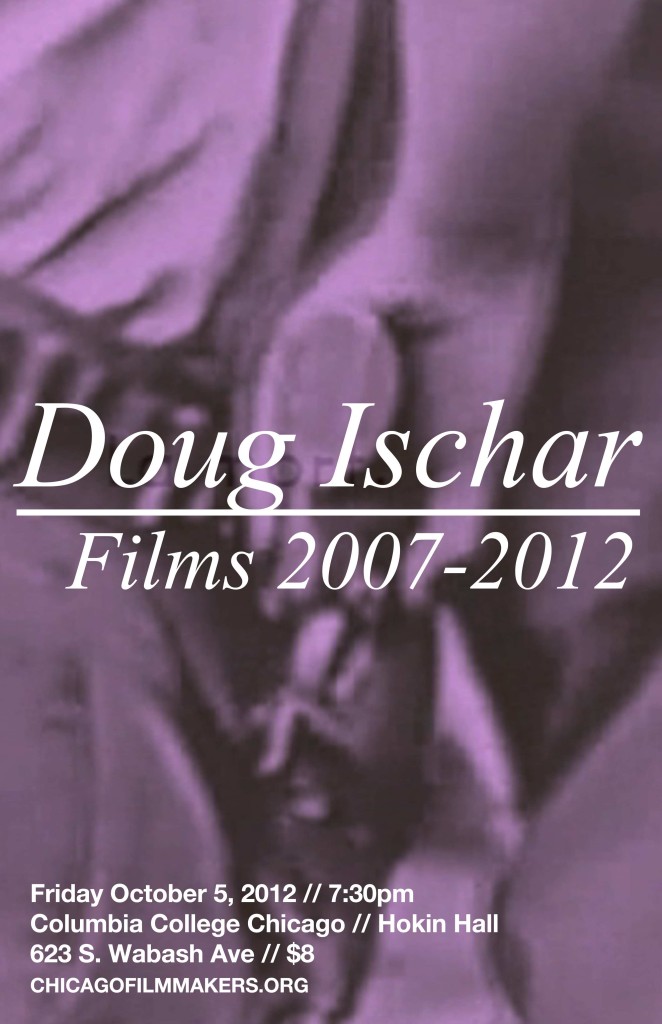