Anthony Elms: Like Stripes that Gather at the Waist (lecture)

Anthony Elms is an Associate Curator at the ICA, Philadelphia. Anthony has worked as an independent curator and writer, and he was Assistant Director of Gallery 400 at the University of Illinois at Chicago for six years. He edits and is the curator of WhiteWalls, an alternative space for artists’ publication projects founded in the 1970s. Anthony has also worked as part of the organizational team behind PERFORMA 2011, a visual art performance biennial in New York. His writings have appeared in Afterall, Art Asia Pacific, Art Papers, Artforum, May Revue, Modern Painters, New Art Examiner, and Time Out Chicago, and he has also written essays for numerous catalogues. 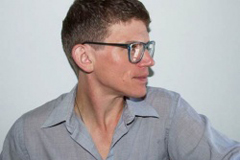