Ann Lauterbach has published several volumes of poetry, including Many Times, but Then (1979), Before Recollection (1987), Clamor (1991), And for Example (1994), On a Stair (1997), If in Time (2001), Hum (2005), and Or to Begin Again (2009), which was a finalist for the National Book Award. As described by Thomas Fink in the Boston Review: “Lauterbach has found new forms for expressing the continuousness of change: its ways of summoning and disrupting intimacy, of evoking and subverting the position of perceptions and the framing and decentering play of language itself.”

In addition to poetry, Lauterbach has published a book of essays, The Night Sky: Writings on the Poetics of Experience (2005). She has received fellowships from the Guggenheim Foundation, the Ingram Merrill Foundation, and the MacArthur Foundation. For over 15 years, she has taught at Bard College and co-directed the Writing Division of the MFA program. She has also taught at the Graduate Center of the City University of New York, Columbia University, Princeton University, and the University of Iowa. 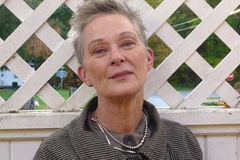