Artist Karen Reimer‘s exhibition at Gallery 400 comprises a new architecture-based entry in her on-going project Endless Set, accompanied by a selection of past artworks that illuminate the role spatial concerns have played in work that has often been read primarily through the lens of craft. It is presented in conjunction with an architecture-based exhibition at the Gahlberg Gallery, College of DuPage.

For more than fifteen years Reimer has created architecture-related installations that reconsider modernist ideals and minimalist embodiment through the quirks and heterogeneity of the handmade and everyday. The two exhibitions extend those interests by making markedly material two explicitly abstract, mathematical concepts of space. Added into Gallery 400’s exhibition are historical Reimer works that consider domestic, discursive, and spatial relations.

Gallery 400’s new work is a single iteration from Reimer’s series Endless Set (begun 2007), in which appliquéd pillowcases marry hand-sewn fabric’s domesticity to the infiniteness of the prime number sequence. Each pillowcase is made from a number of fabric scraps equal to a prime number. Appliquéd on top of this patchwork are the corresponding white fabric numerals. The depicted numeral measures as many inches tall as the number itself. Thus, the white fabric number 7 is seven inches high, and sewn onto a backing made of seven pieces of fabric. As the dimensions of the numbers exceed the dimensions of the pillowcase Reimer folds and layers the number form back and forth across the surface, gradually obscuring the patchwork. The larger the prime number, the more minimal in color and yet more sculptural the works become. For Gallery 400’s installation, Reimer is crafting a pillowcase of the prime number closest to the linear perimeter of Gallery 400’s largest gallery—1,399 inches (116 1/2 feet). The four 1,399-inch high white fabric numerals folded and sewn down to the 26 x 20 inch linear dimensions of a standard pillowcase will become a stunning sculptural form compressing the dimensions of the exhibition space into a thick, dense fabric object, a physical doppelganger of the space. Reimer is currently devising a way to secondarily represent on the gallery’s floors, walls, and ceilings, the full scale (116 1/2 foot high) numerals of the number that is condensed into the sculptural object. 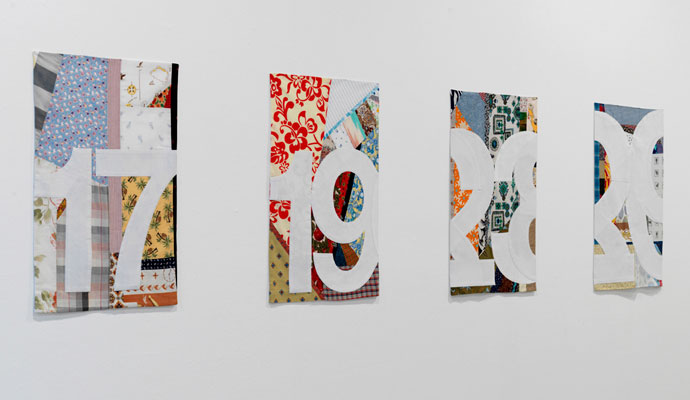