This exhibition features new work by Joel Ross in collaboration with photographer Jason Creps. This series continues Ross’s interest in public signage, veering off the open road to examine text as it interacts with the built environment: the in-between spaces of alleys and parking lots. The artists construct signs which they clandestinely install, photograph, and abandon at locations between Chicago and Southern Illinois, resulting in a series of large-scale, color photographs.

“We looked for fissures and vacancies, roadside spaces we could take advantage of, and then wrote narratives and built sculptures to fill them. We also wrote stories and then searched (sometimes exhaustively) to find locations with the right conditions for those characters. The sculptures are declarations, and they take possession of their site, however briefly, with confidence, humor, urgency, and sometimes aggression.”
– excerpt from Joel Ross and Jason Creps’ artist statement 2012

Joel Ross (American, born 1966, lives Urbana, IL) holds an MFA from the Cranbrook Academy of Art and a BFA from Tufts University. Born in Port Arthur, Texas, he is the son of a police sergeant and the grandson of a Baptist preacher. He received a discharge from the United States Marine Corps in 1984. Currently he is an Associate Professor in the School of Art and Design at University of Illinois at Urbana-Champaign. Recent exhibitions include It’s Not My First Time, Beta Pictoris Maus Contemporary Art, Birmingham AL; (No) Vacancy, Carrie Secrist Gallery, Chicago IL; and Write Now! curated by Nathan Mason, Chicago Cultural Center, Chicago IL.

Jason Creps (American, born 1975, lives Chicago, IL) received his BFA from Columbus College of Art and Design in his home state of Ohio and promptly entered the world of commercial photography. He then spent as much time as possible living in vans and busses while touring as a musician. Chicago became home in 2000 and from there, he works as a photographer, performs with the bands Man Is Man and The Glorious Vapors and makes multimedia installations with One Degree Off. 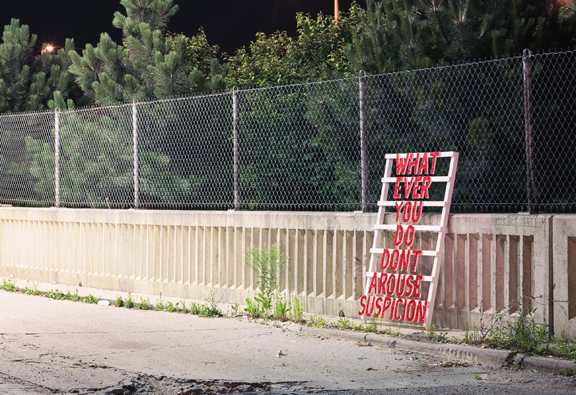