Carl Hammer Gallery (Chicago) and Adam Baumgold Gallery (New York City)* present an exhibition of drawings by Chris Ware to coincide with the release of his new book Building Stories (Pantheon). Over ten years in the making, several of the drawings from this series were first published in the New York Times Sunday Magazine and The New Yorker. Building Stories takes its final form as 14 discrete books and booklets collected in a printed box. The result is something utterly unique-part graphic novel, part sculpture, and part mobius strip.

In these drawings, Chris Ware imagines the inhabitants of a three-story Chicago apartment building: a 30-something woman who has yet to find someone with whom to spend the rest of her life; a couple, possibly married, who wonder if they can bear each other’s company another minute; and the building’s landlady, an elderly woman who has lived alone for decades. Each drawing details the inner life of these neighbors; their thoughts, ambitions, daydreams, second guesses, and real life interactions are scrutinized and in some cases amplified into seemingly monumental events. In his drawings, Ware speeds and slows time, stops it, and can even seem to run it backward, revisiting and revising recent events, or sideways, incorporating alternative accounts of what’s happening. All this is done with utmost precision.** For the exhibition, Ware is also producing a special edition of prints that can be assembled to make a model of the building.

Chris Ware was born in Omaha, Nebraska in 1967. He is a graduate of the University of Texas at Austin and also attended The School of the Art Institute of Chicago. His Jimmy Corrigan: The Smartest Kid on Earth won the Guardian First Book Award and was listed as one of the 100 Best Books of the Decade by the London Times in 2009. An irregular contributor to This American Life and The New Yorker, Ware has been the recipient of numerous Eisner and Harvey Comic book awards and was the recipient of a United States Artists “Hoi” Fellowship in 2007. ChrisWare has had retrospective exhibitions at The Museum of Contemporary Art in Chicago in 2006, in 2007 at the Sheldon Memorial Gallery in Lincoln, Nebraska and at the Gävle Konstcentrum in Sweden in 2010. His original drawings have been exhibited in the Whitney Biennial, the Museum of Contemporary Art in Chicago and in piles behind his work table in Oak Park, Illinois. Chris Ware is widely acknowledged as the most gifted and beloved cartoonist of his generation by both his mother and seven-year-old daughter. 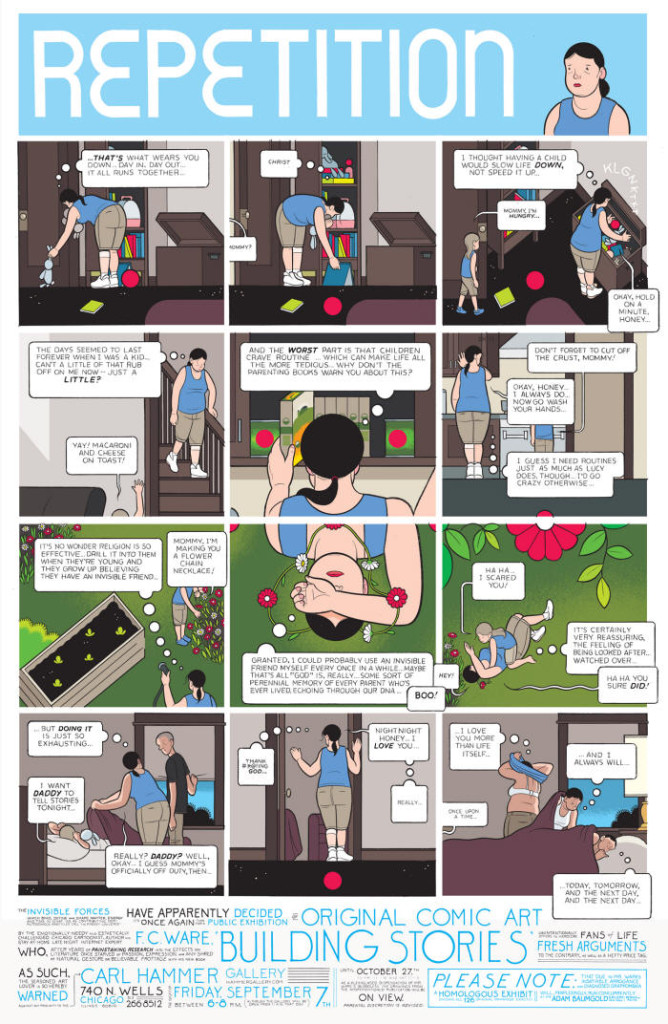