Filmmaker Cauleen Smith wraps up her 2-year Chicago residency and research on Sun Ra with her exhibition The Journeyman – an installation, recording studio, and library about artistic process, research and the relationship between an artist and the subjects they revere. The exhibition will be accompanied by the release of a limited edition vinyl record mixed by Smith that includes recordings she made over the course of her project in Chicago and materials found in the Sun Ra archive at Experimental Sound Studio.

In conjunction with TheJourneyman, Smith, in collaboration with Todd Carter, will open the space to musicians to record in makeshift recording studio. Production times will be released throughout the fall.

Cauleen Smith (born 1967) is a filmmaker whose work reflects upon the everyday possibilities of the black imagination. Smith’s films have been featured in group exhibitions at the Houston Contemporary Art Museum; the Blanton Museum of Art, Austin; and the New Museum, New York. Beginning in 1994, she wrote, directed, and produced her first narrative feature film, Drylongso (1998), which was selected for the American Spectrum of Sundance Film Festival, and won best feature film at both the Urbanworld Film Festival and the Los Angeles Pan-African Film Festival Smith earned an MFA from the University of California, Los Angeles. 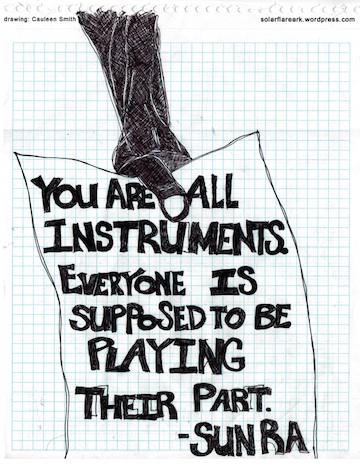