Brent Riley: Who Goes There

On view through Saturday, September 22nd

For his latest show in Chicago, longtime resident, Brent Riley will present 42 original inkjet prints at Firecat Projects in Chicago. The series began in 2006 and was finished 2012. The pieces have no studies or sketches preceding them. They begin as a doodle until a form suggests a direction or a “story”. The artist is aware of the golem/construct metaphors and feels that they have correspondences to his methods and his adherence to, and reverence for, the fantastic figurative genre.

The inkjet prints are “Original” in the sense that these pieces exist in no other form- the prints are the final steps in the process. This series is an outgrowth of drawing with ballpoint pen on gray cardboard (the insides of fed-Ex envelopes.) From these beginnings, he scanned the drawings and subjected them to alterations available via digital processing (in this case, Photoshop). Although no attempts were made to make the work appear to not be computer art, the hand drawn bases of the pieces dominate. What alterations are made to the forms are made using the material of the particular drawing itself. Of course all color is digitally added. Various dedications (seen in the titles) come about just before or after the pieces are completed. 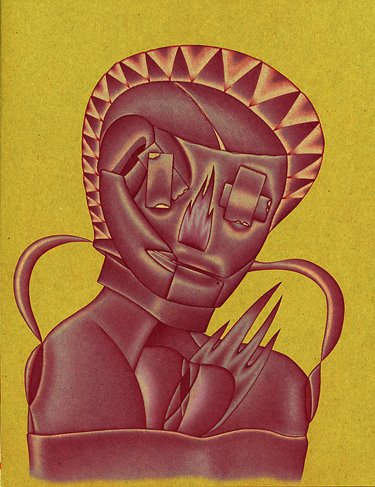