French philosophy of the 20th Century is often understood as being divided into two broad streams, one defined by an attention to logic, concepts or structures, the other by a concern for vitality and life. In this talk, Tom Eyers brings together the philosopher of science Georges Canguilhem and the metaphysician Gilles Deleuze in order to question this divide, posing instead the possibility of a philosophy of “living structures” or materially grounded “life.”

Tom Eyers is a Mellon Foundation postdoctoral Fellow in the Humanities at Washington University in St. Louis. His book, Lacan and the Concept of the Real, will be published in October 2012 by Palgrave Macmillan.
This lecture is presented by InterCcECT: the Inter Chicago Circle for Experimental Critical Theory, and is co-sponsored by Gallery 400. 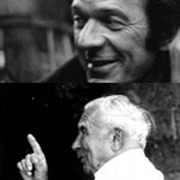