The Dragon is the Frame Performances

One night only, an array of talented local and national performance artists present dynamic pieces created out of planned and realized collaborations with Mark Aguhar, as well as those inspired by her life and work. In collaboration with Isaac Fosl-van Wyke, Xina Xurner performs She Came Inside Me, which comprises drag, noise, music, and dance. Lyrics of the song are directly inspired by my sister Mark: “She came to me. My sister lover other. I am alive in her noise.” Xina Xurner will make you sweat. Colin Self evokes in his performance Long Hair a mutual transformation with Aguhar, expanding the work into the audience, along what the artist calls a “trajectory of femininity.” Preceding and following these performances, and several documentation videos of Mark Aguhar’s performances, are the three sections of R. E. H. Gordon’s DIFFERENTIATION, which is presented in a darkened space punctured by roving spotlights. DIFFERENTIATION’s slow, projected, and declarative dialogue between two performers touches on themes of ritual, sacredness, virtual bodies, and interpersonal and spiritual love. Further dissolving the boundaries within the program, Steve Hnilicka will interact throughout the evening with the crowd as part of an original durational performance Femme Self Care, honoring Aguhar’s process and documentation of self-care. 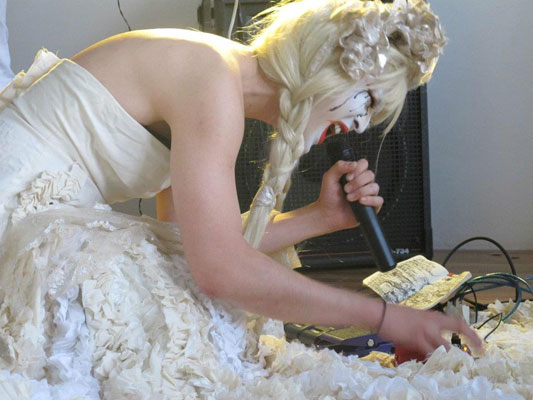