A. Laurie Palmer’s research-based art practice explores matter’s active nature on a range of scales and speeds. She seeks to tap into and collaborate with material forces and to construct situations and structures that invite consideration of our own capacities and agencies. She has most recently focused on how we use and share land and other natural resources, specifically through an extended investigation of industrial mineral extraction sites and the movements of substances between land and bodies.

Her work takes various forms as sculpture, public projects, writing, and interdisciplinary collaborations. She has shown, lectured, and published nationally and internationally since 1988, both independently and with the artist collaborative Haha, and has received generous foundation and institutional support, including from the Louis Tiffany Foundation, the Illinois Arts Council, the Richard M. Driehaus Foundation, the ArtCouncil (now Artadia) and the Radcliffe Institute. Around the year 2000, she began to focus her individual practice on local projects relating to land-use. The book 3 Acres on the Lake: DuSable Park Proposal Project, published by WhiteWalls Press in 2004, documents a public art project and exhibition related to these concerns. In 2008, WhiteWalls published With Love from Haha documenting twenty years of Haha’s site-based work, and also marking the end of that long-term collaboration. For the last five years she has been researching and writing a book on industrial mineral extraction sites in the U.S. and the movements of substances between land and bodies (Eating the Earth), which is now on review at the University of Minnesota Press. She has returned to the studio to work on sculptural projects related to this ongoing research, and to other considerations of matter’s active nature and explorations of our collective capacities for change. 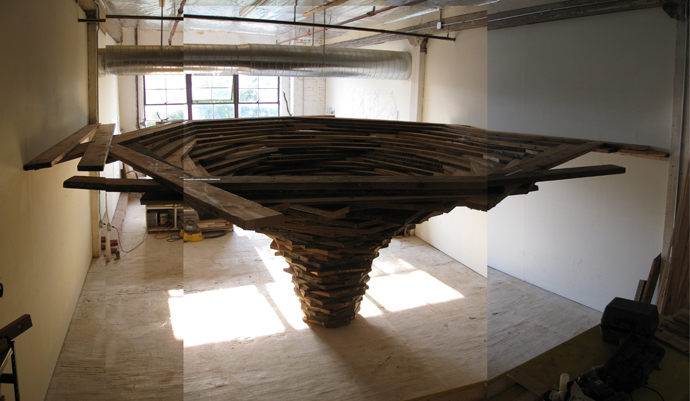