Escape Into the Briar Patch

Joan Goldin makes images that take some queues from medical TV—the feel of gut and liver. The sound of a dramatic prop organ plops into the medical tray. Wet and somehow failing, there is an aura that we need to act quickly or give ourselves over to dire consequences. But Joan’s photos aren’t imitating. There isn’t a story line. More ordinary than surgery or dissection.

Note taking. These images are observed, maybe repeated. Each version has a scrawl that directs us to pay attention to another part. Joan seems to have a system, but we’re not let in on that information. So many artists look at science as unknowable, as a kind of beauty. Joan works like someone who knows her science. She is thinking faster than the experiment. Revelation. And though there is darkness and danger, the rupture generated by her dashed reminders are as much about play and humor as they are about the stuff they are running from.

Susannah Papish generates her images rather than dashing off notes, so they come at a slower pace. Methodical. Most of the time, things arrived at slowly are deadly serious. But Susannah’s images could be inspired by a 50’s mermaid dance party. Even when you realize the decorations are all internal organs and cancerous growths they are glimmery and lickable and add the perfect pop to your flouncy dress.

There is a tendency in nature related to bright markings: they tend to communicate things. One example is the don’t-fuck-with-me message worn by a venomous species. Susannah’s lovely flowers both bear witness to their own poisonous inflections and are an exterior reflection of an embattled interior. Wet and dark recesses are illuminated in synthetic color arrays. It is an alien world, and not at all peaceful. Tumors and parasitic cells and the last throws of life. Drowning. 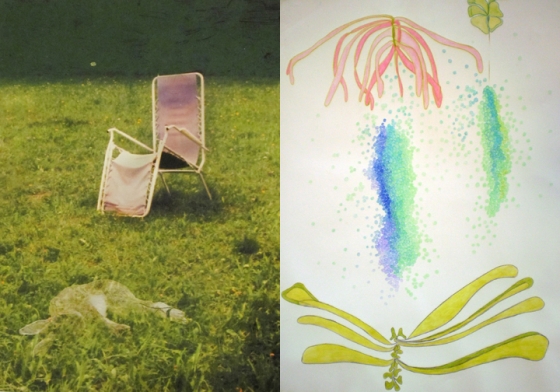