Twin brothers Alan and Michael Fleming have been collaborating since 2005, developing an interdisciplinary artistic practice that is embodied, conceptual and playful. Their work encompasses performance, video, photography and sculpture. Recently separated and living in both New York and Chicago, the brothers are currently redefining their practice based on the limitations, discoveries and new territories of collaborating across distance.

The Fleming brothers have shown their collaborative work throughout the United States and abroad. They have performed at the Museum of Contemporary Art Chicago, The Chicago Cultural Center, BARN in Brooklyn, and The Centre for Contemporary Arts in Glasgow, Scotland. Their award winning videos have been screened internationally in exhibitions such as The International Installation of Video Art at The Foundry Art Centre, MO; Interrupt! Intervene! Art as Social Practice at UC Santa Cruz, CA; Kinolewchyk Festival at Idea Museum in Lviv, Ukraine; and URBAN SPACE screened simultaneously at Oi Futuro in Rio de Janeiro and New Life Shop in Berlin. Their work has appeared in Time Out Chicago, Art Slant, Buzz Magazine, Chicago Art Magazine, and Artforum.

Recent group exhibitions in Chicago include No Joke at LVL3 Gallery (2011), Construction Site: Identity Made Material at the Boomerang Space (2010), The Joke is Irresistible and Process in Product: Work from Summer Studio at The Sullivan Galleries (2010). The Fleming’s were artists in residence for Summer Studio at The Sullivan Galleries in 2010 and recipients of a project based residency at Ox-Bow School of Art teaching a collaborative performance workshop in the summer of 2009.

Alan and Michael Fleming both received their BFA in Painting from the University of Illinois at Urbana-Champaign in 2007. They went to graduate school as a collaborative on a shared Merit Scholarship and earned their MFA in Studio from the Performance Department at The School of the Art Institute of Chicago in 2010. Michael was the recipient of a prestigious Jacob K. Javits Fellowship and Alan was the recipient of a Professional Advancement Award in Dance from the School at Jacob’s Pillow in 2009. 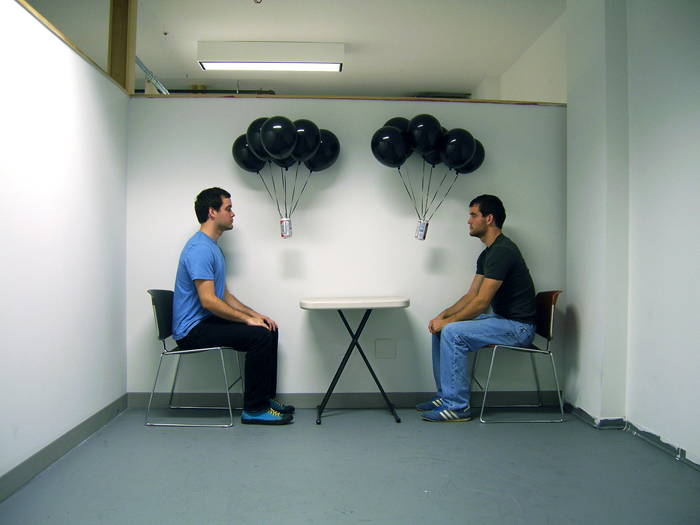