The World Finder, an Epic Tragedy in Four Acts

For the 1893 World’s Columbian Exposition in Chicago, Steele MacKaye endeavored to build the world’s largest theater, the Spectatorium, with 25 stages and seating for 8,000 people. Using real water, real plants, and a cast of thousands, the featured theatrical production would have told one of history’s greatest stories—Columbus’s voyage to America. Pocket Guide to Hell, along with Martin Billheimer, Sid Cook, and Max Wastler, dramatize MacKaye’s rise and fall in a performance that features a combination of music, oratory, and pantomime. 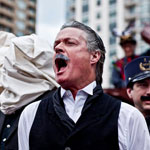