Musing on both the language of minimalism and an adolescent obsession, Jon Waites makes. Objects that allude to ramps and inclines, ollies and grinds. In sight of the work, one could start to pair labels: painting and/or sculpture, classical and/or adolescent, narrative and/or formal. The artist would rather we parse his approach and process. These works are first and foremost projections. Desired projections. Things that are made to be beheld with both the eyes and the body. Things that remind one of carefree yesterdays. Things that have to be made.

Often, work that one must make, is most convinced by, and loves, has a touch of the absurd. Waites ponders the contradictions between forming and impulse, and in forms and surfaces. What does one do with the seemingly ridiculous need to manifest these objects that marry art’s history and the personal, except maybe act on it? How should one tune an expression of restraint, and how can the minimal and mundane recall such pleasurable past times? Indeed, these are not just hollow forms.

Of course, the work might have a different resonance for the viewer, especially if one has not much experience sliding or airing. Perhaps the fact that we are left to observe clarifies what is more important. To think about the absurd repetition of the creative gesture itself, laboring at what has no concrete perfection. Scale, shape, material, color these may change as each singular work is built, the same way maneuvers are obsessively invented. And like these maneuvers, there are no real absolutes, magic formulas or golden means. The artist can only and wants to remember, re-imagine, rehearse and redo. Jon Waites works.

Jon Waites was born in Santa Fe, NM, and now lives and works in Chicago, IL. 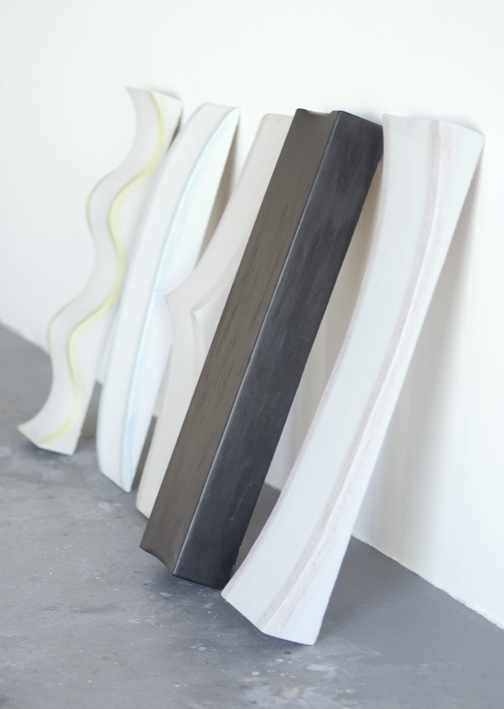