On view through Sunday, January 22nd

PEREGRINEPROGRAM is pleased to present new works by Karsten Lund. Developed over the past two years, this group of collages and larger set of small drawings arise from parallel processes that combine repeating, fixed procedures and more improvised responses, the convergen…ce of a steady system and unpredictable elements. In the end, each unique piece joins others much like it, allowing something more expansive and complex to emerge. As Italo Calvino once wrote, “Around each image others come into being, forming a field of analogies, symmetries, and confrontations.”

The small drawings (Untitled, 2010-11) begin as a blizzard of marks on immense sheets of paper. Within this chaotic field of possible imagery, Lund searches for viable compositions and slices out these fragments. Finally, he adds new elements to each one—dense black shapes and vivid lines—in response to the more ethereal forms that are already there. In contrast, the collages (A Few Scraps from the Void, or The Last Days of Life, 2011), are produced using found images, specifically pages from old issues of Life magazine, dating from its last gasp as a weekly publication in the early 1970s. After affixing these images face down on a temporary surface, they’re covered over with a grid of masking tape. When the layer of tape is ripped away it brings the pages with it and turns into the crumpled substructure for a new constellation of ragged pictures.

So what do we see in any given image or take away from their accumulation? In late January, the exhibition will close with a gallery talk — a set of afterthoughts spinning out from the work, some borrowed from disparate sources or jotted down long after the fact. Might a body of work itself just be a wild system for generating ideas in its wake? Eventually, these ideas and departures may be all that remains, since masking tape and magazine spreads are bound to degrade, to fall apart and fade over time, or all too quickly if we leave the curtains open and let the sunlight in.

“Space melts like sand running through one’s fingers, time bears it away and leaves only shapeless shreds… A silvery spider web at the center of a black pyramid… Strange weather and vague suspicions. All rhythm, no rest. Noise and information. A line of flight in all directions forever…” 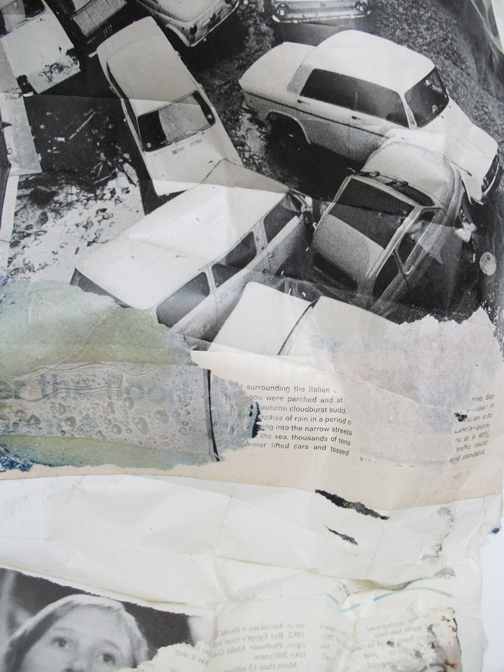