It’s an age old debate: which city boasts the best style of hotdog. The International Hotdog Forum aims to put this argument to rest by bringing together twelve of the most infamous regional hotdog recipes, not to compare against one another, but to celebrate the nuanced differences and diversity of tubesteak styles.

Chef Eric “E-Dog” May has assembled a caucus of eleven guest chefs that have contributed recipes representing their chosen city’s style of dog. On October 8th from 4-7 PM in the city of Chicago, that great hotdog town, we invite you to join us to sample our creations. Do not expect newfangled haute cuisine- with all due respect to the current culinary fad of dressing up comfort foods- with this event we strive to replicate original recipes and their modest origins. This style of eating reflects the culture of street food- cheap on-the-go fare that is enjoyed the world over by mobile urban populations. Many of these recipes are decades, if not centuries old and reflect the converging of cultural foodways in the great urban melting pots of the world.

Take the Chicago-style hotdog for instance, emblematic of the city’s no nonsense street cuisine, its piles of condiments represent a panoply of influences of the city’s immigrant cuisines- the frankfurter, originally a German recipe was adapted by a Jewish merchant to provide a kosher product for his clientele, replacing the pork with beef. He was of Hungarian decent, so native spices such as garlic and paprika were added to the recipe to produce a snappier flavor profile. During the depression, the hot dog became a vehicle to deliver a meal on a bun, a cheap and portable repast for workers. Different immigrant populations customized the toppings to their liking, the Greeks added tomato, southern blacks introduced a pickled pepper called the “sport”, Jews also contributed the pickles, and the relish was originally an English accoutrement that was derived from Indian chutneys. Over time, the sandwich became canonized, including all of these ingredients.

At the Forum we will span the evolution of the hotdog as the epitome of mobile, urban eating. We will represent the humble origins of the sausage-on-a-bun concept with a simple frankfurter, enjoyed for centuries in Germany and Austria. The American invention of the hotdog is fiercely contested, and likely resembled their European counterparts in their simple formula of sausage, roll, mustard. In the 1870’s German immigrant Charles Feltman was said to have been the first vendor of frankfurters in America. Or was it another German, Antonoine Feuchtwanger, who legend tells of inventing the concept on the streets of St. Louis as a means of keeping his customers hands clean. Or was it yet another German immigrant, Anton Ludwig Feuchtwanger who brought the frankfurter to the Columbian Exposition here in Chicago in 1893. Perhaps these are the legends that fuel the debate of which town serves the best hotdog. At the forum we will stack up styles from the birthplaces of the hotdog- the New York “dirty water” dog will finally sit side by side with the Chicago style. The Kansas City style dog will reflect its German heritage with sauerkraut, while the Carolinian dog takes an American spin on the cabbage accoutrement with a sweet coleslaw. The Coney dog will reflect its Greek heritage in the spicing of its chilli topping. Things get more mogrelized as we head west and Seattle spreads cream cheese on its jumbo beef franks. Los Angeles and Southern Arizona “Sonoran style” keep a dialog with Mexican street dogs by wrapping their wieners in bacon and garnishing with salsas or grilled chiles. Things get really flamboyant as we head to South America, where hotdog traditions have taken a life of their own on the streets of Maracaibo, Rio de Janiero, Santiago, and just about every other major city. These jaw-unhinging concoctions extravagantly pile on topping after topping, while each recipe maintains its distinct flair from each city’s style. 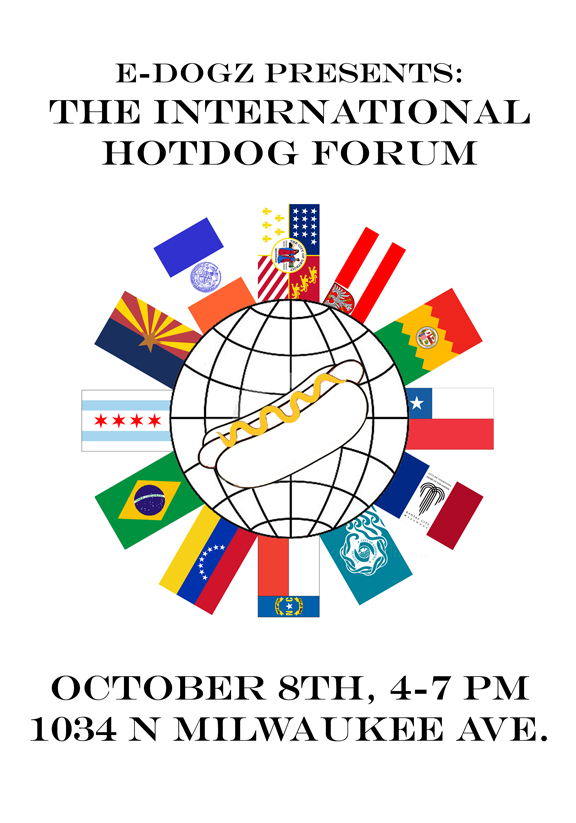