MY GHOSTS AT HOME

On view through Wednesday, September 21st

In My Ghost At Home, the inaugural exhibition at Parallax Gallery, three artists present work that courts tragicomic circumstance as a source for image making. In the works of Gil Riley (MFA 2012), Brian Rush (MFA 2012), and Josh Dihle (MFA 2012), mutational figures and forms carry out a negotiation between otherworldly environments and the physicality of their materials. Each artist targets the viewer as a subjective witness, using color and shape as intermediaries to elicit a direct emotional response to visual experience.

Gil Riley subverts the machismo of Neo-Expressionist painting by introducing bright, saturated color and broken female forms into an absurdist painterly arena. In Brian Rush’s prints and drawings, simple and direct gestures describe a series of uneasy but appealing hypothetical environments. Similarly, the paintings and sculptures by Josh Dihle convey a lighthearted joy in the creative act that, as in all of the works included in My Ghost At Home, is filtered through the anxieties of daily life. 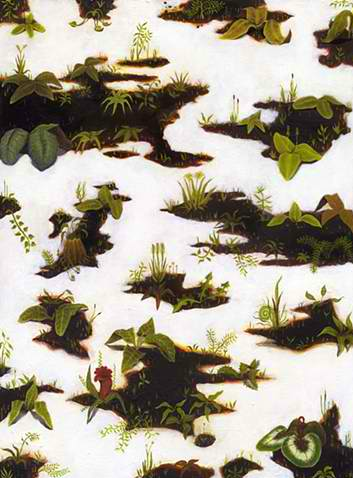