On view through Saturday, February 13th

One of my fondest memories as a child was going to a lady’s funeral. I’m not sure who the lady was. I thought she was a relative, but to this day I have not been able to figure out who, nor do I have one single recollection of her alive. I do remember that she was the most beautiful woman I had ever seen. Her hair was blue-black, her skin like porcelain, and her lips the color of the roses which cascaded over the top of the casket. She looked like Snow White. The rest of the room was equally fabulous, decorated in maroon, forest green and gold with overstuffed furniture, thick carpeting and flocked wallpaper. And then there were the flowers—everywhere there were flowers—the smell of which when blended with perfume and candles made my head spin. I was sure that this was how a palace looked.
It wasn’t a sad occasion, as I remember or at least I wasn’t sad—I was having the time of my life. I wasn’t scared either, although everyone kept warning me that I would be. My mother told me that if I touched the body I would not have nightmares. My sister told me that a dead body felt like icy marble. The thought that such a glorious being could be carved from stone overwhelmed me with anticipation.
I gently touched her hand, and as the skin moved slightly my heart sank with disappointment. She was cold, however; and for a brief moment my hopes were raised as I thought perhaps my sister had meant that the body would feel like marble with skin over it. But on further inspection, I knew this was not so. She was no different than any of us.
Tony Tasset

original card mock up is on display here

Reviewed in the Chicago Tribune 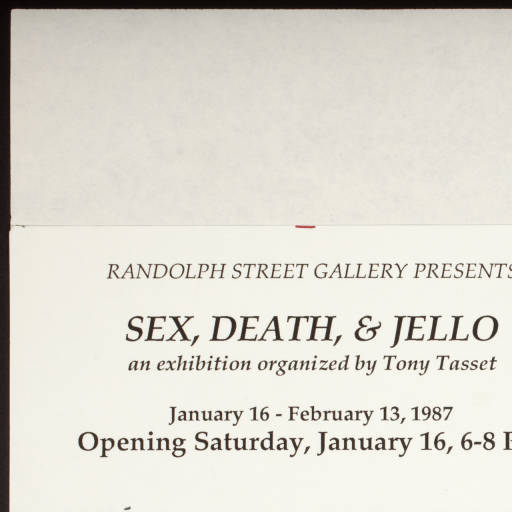